Dushy Perera meets a Tiger … at Ranthambore in Rajasthan

Ranthambhore is known for its large tiger population.[3] As park tourism and the population of neighbouring villages increased, there were more frequent fatal human-tiger interactions and poaching. The Indian government started Project Tiger in 1973 and allotted an area of 60 mi2 of the park as a tiger sanctuary. This area later expanded to become what is now the Ranthambhore National Park.

In 2005, there were 26 tigers living in the park. This was significantly lower than the recorded tiger population of the reserve in 1982, which stood at 44. According to non-government sources there were 34 adult tigers in the Ranthambhore National Park in 2008, and more than 14 cubs. This increase was attributed largely to sustained efforts by forest officials to curb poaching. Villagers in the region were being given incentives to stay out of the park, and surveillance cameras were also fitted across the reserve.[4] The Indian government committed US$153 million for these efforts.[4] They were successful enough to make Ranthambhore eligible to participate in the Sariska Tiger Reserve relocation program.[5] The first aerial relocation, of the male tiger (Dara) from Ranthambhore to Sariska, was done on 28 June 2008 by Wing Commander Vimal Raj, using a Mi-17 helicopter. Unfortunately, this translocated tiger died on 15 November 2010 due to poisoning. 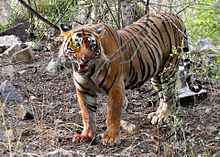 T-24, considered to be the largest tiger in the park

During the past few years, there has been a decline in the tiger population in Ranthambhore due to poaching and other reasons.[3]

A tigress known as “Lady of the Lakes” was separated from her parents at a very young age because of poaching. The young tigress was named Machli after the mark on her body that resembles a fish. She gave birth to three female cubs, one being dubbed ‘Machli – The Junior’. The father of Machli Jr. died early from an unknown disease, as confirmed by forest officer Fateh Singh Rathore. Machli Jr. mated with the male tiger Bumburam and gave birth to two cubs, Slant Ear and Broken Tail. Baccha is believed to be her grandson. At 17 years old, Machli Sr. is the world’s oldest tigress. Machli recently went missing, raising concern among forest officials, as hunting is difficult at her age.[6] After twenty-six days Machli was spotted and located by forest officials. Machli’s daughter T19(Krishna) is the current queen tigress of Ranthambhore. She recently gave birth to four cubs, with three surviving. Machli died on 18 August 2016 at the age 20 years. She became longest living tigress in wild environment recorded till date.

Leopard Family on the Road — at Yala, Sri Lanka