Of Traitors and Patriots

PREAMBLE from Michael Roberts: Anura Gunasekera’s essay is truly important and is inserted here because some threads mesh with contentions I have presented earlier. When in Sri Lanka in May 2009 I penned an article “Some pillars for Lanka’s future” in response to a request from an Indian periodical which addressed the import of President Rajapakse’s version of patriotism. I repeat it here as Preamble to Gunasekera’s intervention largely because it also represents a questioning of the position adopted by the head of state albeit in a less direct manner than Gunasekera. This questioning, and for that matter Gunasekera’s telling commentary, is in line with my opening essay SINHALA MIND SET which stands as frontispiece to my web-site.

END_OF_DOCUMENT_TOKEN_TO_BE_REPLACED

Courtesy of http://www.transcurrents.com. This essay was first drafted on 23 Dec. 2009, as a sequel to the short note on “The Eelam Struggle,Tamil Tigers and Their Commemoration of Māvīrar (Great Heroes)” under the thuppahi cover.

The photographic images that have been deployed on web in my essay on “The Tamil Tigers and Their Practices of Homage” (httt://thuppahiwordpress.com) as well as a host of less accessible academic articles convey the importance placed on the commemoration of the fallen by Pirapāharan and the Tiger leadership. The institutionalisation of mortuary rites of burial for their fallen from circa 1989 – in a radical move away from the cremation for those of Saivite faith[i] – was a way of sustaining meaningful bonding between Tiger personnel and those who had sacrificed their lives for the cause of Eelam.[ii]

END_OF_DOCUMENT_TOKEN_TO_BE_REPLACED

Tamil Tigers and Their Practices of Homage

Michael Roberts on the Eelam Struggle, Tamil Tigers and Their Commemoration of Maaveerar (Great Heroes)

In response to a request from two friends I post a list of my academic writings on this subject for the benefit of those with the capacity to access such resources and the patience to read long essays. 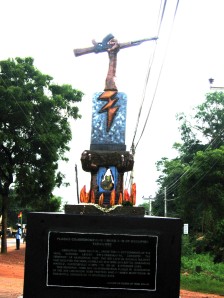 Bodies that Fight On

This icon was built in 2004 and commemorates the Tigers who fell in recapturing the Kilinochchi locality from the Sri Lankan army a few years previously. The title is my invention and is intended to capture the sense of empowerment and defiance embodied by its signs, notably the black power symbol with gun. Note however that, in a fusion of ‘tradition’ with modernity, this icon is encircled by the karthigapoo or glory lily (the LTTE’s emblematic flower) in the manner of a Hindu rite of ārati. Vaitheespara remarked that it conveyed the idea of a ‘resurrection,’ a perceptive reading that is supported by one of the themes – that of renewal and regeneration — coursing thorough LTTE poetry studied by Dagmar Hellmann-Rajanayagam (South Asia 2005).