A Treasure Trove of Jewish Memorabilia in Manchester

Nazia Parveen, in The Guardian, 24 September 2020, where the title reads “Time capsule from 1873 found buried in wall of Manchester Jewish Museum”

As builders renovated the oldest surviving synagogue in Manchester they found the capsule buried next to the Museum’s Ark, the chamber which houses the Torah scrolls, filled with synagogue papers, newspapers and some old coins.

Early synagogue minutes show records of the capsule being laid in the cornerstone of the original building around 1873.

“We were taking extra care to remove the plaque but never imagined we would find something as old as the building still intact,” said Adam Brown, the site manager.

“It created a lot of excitement around the site. It was obvious a lot of time and effort had been spent placing the capsule all those years ago. To find it in perfect condition felt really rewarding.”

The Grade II*-listed building, described by English Heritage as “one of the highlights of Victorian Gothic architecture in the country”, is the oldest surviving synagogue in Manchester. The local Jewish population moved away from the area in the 1970s, making the synagogue redundant, and it was given a new lease of life as the Manchester Jewish Museum in 1984. 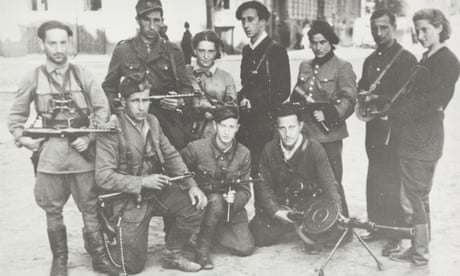 Untold stories of Jewish resistance revealed in London Holocaust exhibition
Britain’s only Jewish museum outside London, it became home to more than 30,000 objects, from personal letters and photographs to Torah scrolls hidden from the Nazis during the second world war.

In June last year the Victorian building, Moorish in style and built by Jewish cotton traders from Spain and Portugal, closed its doors for almost two years for an ambitious £5m development project, partly funded by a National Lottery grant of £2.89m in 2017.

Museum leaders now hope the discovery will help to tell the story of the museum’s former life as a synagogue, when it sat in what was once a thriving Jewish quarter with a congregation of Sephardic Jews, many originally from the Iberian peninsula.

“This timely discovery comes at an apt and symbolic period when millions of Jewish people around the world prepare for the holiest day of the Jewish calendar, the Day of Atonement, a reflective and thoughtful time of year when many observers look backwards as a means to move forwards,” said its chief executive, Max Dunbar.

Dunbar, who has worked at the National Portrait Gallery, Christie’s auctioneers and the World Rugby Museum, added: “We are thrilled and overwhelmed by its discovery and look forward to displaying it in the new museum next spring.”

It is hoped the redeveloped museum will increase annual visitor numbers from 10,000 to 40,000 when it reopens in spring 2021.

An interactive street map of Manchester’s historic Jewish quarter will be created in the museum’s new gallery, alongside a variety of displays including a Russian washboard used as a cricket bat, and the belongings of a Holocaust survivor who spent the war hiding in a coal cellar.