The Decline of the LSSP in 20th Century Sri Lanka: Sivasambu’s Question

ABOUT Nathan Sivasambu: Nathan Sivasambu is an old-school Trotskyite and a Sri Lankan to the core. After his undergraduate degree from the University of Ceylon in the 1950s he migrated to England. He has sustained his interest in island politics as well as the literary world associated with the Bloomsbury Group and Leonard Woolf. His batchelor-flat near Russell Square placed him close to the Bloomsbury arena in London… and the British Museum as well as SOAS and its Sri Lankan stock of books.

He has been a key organiser of discussions devoted to Sri Lankan literary and political issues at the “Great Court” café within the British Museum in recent decades — with such literary figures and musical virtuosos as Romesh Gunasekera and Rohan de Saram among the participants. It is as ecumenical and non-communal a collective as anyone would wish for and I felt privileged to attend a gathering a few years back.

Nathan and I have been in regular touch by internet mail ever since. He has recently tried to prod me to pursue an important historical issue: the reasons for the decline of the LSSP and the ideological currents which this party introduced in 1935 and sustained in prominent fashion till the 1950s.

As I am embroiled within other topics and felt that my competence in this realm was inadequate, I sent a circular to those whom I deemed capable of presenting thoughtful answers. I now have a Memorandum from Vinod Moonesinghe and can kick off the debate … with heartfelt thanks to Vinod.

A NOTE from NATHAN SIVASAMBU in London, Dec 2019

Dear Michael, Why not turn attention to the collapse of the LSSP? They entered the SLFP coalitionin June 1964 and have been wiped off the Parliamentary map since 1977. Bala Tampoe pointed out here [in London], at a Seminar I convened for him, that they hadcommitted themselves without any reservations to the electorate, and the electorate has rejected them.

Since 1994 they have to depend on being nominated to Parliament by SLFP. The complete collapse of the LSSP is one of the major political events of our time. The collapse is historic.

The 1947 General Strike led by the LSSP ....from Mike Harman article

A Response from Vinod Moonesinghe, mid-December 2019 … with highlighting emphasis from The Editor, Thuppahi

There is no simple answer to this question. However, to reduce it to a question of electoral politics or coalition with the SLFP is too simplistic.

In answer to what, according to Nathan Sivasambu, Bala Tampoe said at a seminar about theLSSP embracing electoral politics and the electorate rejecting them, it should be pointed out that the LSSP(R), which was Bala’s split-off from the LSSP, got annihilated at the polls and disintegrated long, long before the LSSP’s demise.

As for the LSSP “embracing electoral politics”, this was simply not the case. The LSSP’s strategy was to use the electoral process to further the cause of the revolution. In introducing employees’ councils to state corporations, the LSSP’s aim was to create organs of dual power. In creating the Hansa regiment in 1977, the LSSP was attempting to form the core of a revolutionary army — it was strengthened with party cadres who had been purged from the [Sri Lankan] Army following the so-called “Coup” attempt of 1966. The fact that the LSSP refused to convert itself to an electoral-based party from a cadre party (as proposed by Hector Abhayawardena) shows that it had not “embraced” a solely electoral policy.

However, to ignore the electorate, in a situation in which bourgeois democracy had been established for decades, would have been madness.

Then we come to the reasons for its decline. In the mid-1970s, Sri Lanka faced a food crisis at a time of world food shortages) combined with the oil shock, at a time when the plantations companies’ disinvestment from Sri Lanka to East Africa had resulted in a decline in the number of yielding plants (due to lack of replanting) — which resulted in a ten-fold increase in the trade deficit. The Left was blamed for the subsequent shortages and hardships. Nevertheless, the Left retained much of its electoral strength, although wiped out in Parliament. The percentage the Left Front got in 1977 exceeded that which the JVP ever received.

The Left continued to be strong, despite the lack of parliamentary representation, because of its strength in the Trade Unions. The ill-advised 1980 general strike saw the near annihilation of the LSSP’s strength among organised workers. This was compounded  by the collapse of the industrial sector after 1977 — about 100,000 workers lost their jobs because of the “opening up” of the economy, most of them in cutting-edge manufacturing industries such as electronics and tea machinery — which resulted in the elimination of LSSP representation in private industry.

The loss of the bulk of its trade union base meant the LSSP was only left with an electoral alternative — and it was weak electorally. The obvious alternative would have been to back the candidacy of Hector Kobbekaduwa (as the Communist Party did, profiting immensely). Even the NSSP’s Vasudeva Nanayakkara asked the voters to cast their second preferences for Kobbekaduwa. Dr Colvin R de Silva’s candidacy, together with his “law point,” was seen as detrimental to the campaign to defeat JR’s incipient fascism. The LSSP lost huge swathes of support and goodwill, especially after JR jailed Vijaya Kumaranatunga and his so-called “Naxalite” colleagues, and after he banned the NSSP, CP and JVP after the anti-Tamilpogrom of 1983.

The next blow came with the Indo-Lanka Accord. In a fairly transparent exercise in regional hegemony, the Indian state imposed its will on Sri Lanka. JR was told that unless he signed, Indian troops would be in Colombo in 48 hours “raping your women” — these were the words used by MH Mohammed in describing it, and JR mentioned how he got bullied to several opposition politicians. The popular uprising which took place against it was an expression of nationalism, not of anti-Tamil feeling (as was made out). In this situation, the LSSP’s support for the Accord was seen as going against the principle of Sri Lankan independence and sovereignty which it had championed since 1935.

Nevertheless, the LSSP, in alliance with the SLMP and CP, managed to make some headway in the widely-boycotted Provincial Council polls. However, its stance on the Accord lost it  considerable support in the old working-class and plantation belt, from Kaduwela to Deniyaya.  This meant that, when it was targeted by the JVP’s assassination teams, the dead received little sympathy. When it went into alliance with Chandrika’s government, acquiescing in her neo-liberal policies, it lost all credibility. Unlike in 1970-75, it made no attempt to defend working class gains, or to push Left-wing agendas, but simply went along with the privatisations and the open corruption. Its supporters transferred to other parties, such as the MEP and JVP.

In the final analysis, the key issue was the destruction of the trade unions in 1980. With them, the working-class culture of the workplace disappeared, as well as the predeliction of the workers for class struggle. This laid the foundations for the emergence of nationalist cross-class solidarity instead of class solidarity. Nowadays, young people do not think in terms of class, but as individuals who want to get ahead. Urban gentrification has ripped the heart out of working-class neighbourhoods, leaving only the petty-bourgeoisie and the lumpen proletariat. In this atmosphere, the prospect for socialism is weak. 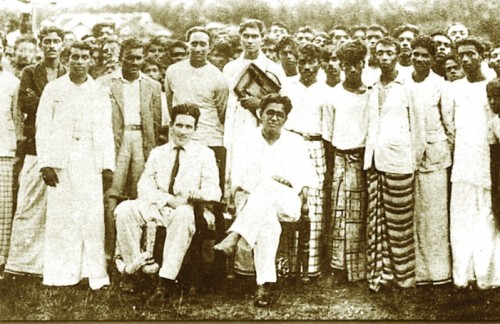 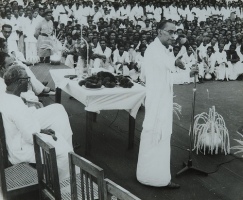 An ESSAY on the DECLINE OF THE LSSP, by Leelananda De Silva, in The Island, 4 January 2020, entitled “The Demise of the LSSP: Some Points to Ponder”

1. The LSSP was never an indigenous movement. It’s early influencers were from the West –  the British Labour Party and the Trade Union Movement in England; the Soviet Union, it’s Communist Party, the split between Stalin and Trotsky, issues such as Trotskism and the Permanent Revolution and such arcane matters. For most of its early life, the LSSP partner was the Bolshevik-Leninist Party of India. With a name like that, you do not need enemies. Unlike Gandhi’s and Nehru’s Congress, or Mao’s peasant revolution in China, there was nothing Sri Lankan at that time in the LSSP.  The UNP and the SLFP were genuine indigenous parties.

2. The LSSP was focused on the urban proletariat in Colombo. Sri Lanka was primarily an agricultural country, and there was no industry to speak of. The LSSP never intended to reach out to the peasant.

3. LSSP had a powerful base in the Trade Union Movement, but the most powerful trade union was that of Thondaman and The Ceylon Worker’s Congress which represented the ethnic Indian minority on the estates.

4. When party politics came into Sri Lanka at the time of independence, the LSSP had no choice but to get involved in electoral politics. Between 1947 and 1960, it did not do too badly, especially due to the impressive leaders it had at that time. But after the March 1960 election, when the LSSP tried to go it alone and obtained 10 seats, the days of the LSSP were numbered. Then between 1960 and 1975, the LSSP had to be associated with the SLFP to have any influence.

5. The most pathetic moment of the life of the LSSP was its active engagement in killing off the secular constitution of Sri Lanka in 1972. It was instrumental in breaking up the secular constitution and removing the independence of the judiciary and the public service, which began the decline of democratic processes in Sri Lanka, and the gradual rise of authoritarianism.

2 responses to “The Decline of the LSSP in 20th Century Sri Lanka: Sivasambu’s Question”