Pictorial and Word ‘Recipes’ for Reflection 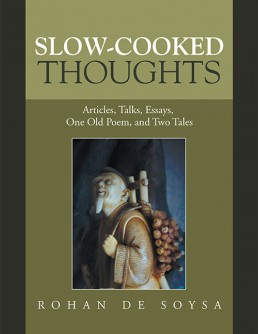 Human life on the earth has taken an exacting toll on the planet. Climate is changing, biodiversity is declining, and our children’s futures are in jeopardy. So what can we do, today, to reverse these trends and rediscover the value of our planet? Slow-Cooked Thoughts is an eclectic and thought-provoking collection of talks, essays, and articles, including an account of an overland trip and two tales of life seen from the perspective of nonhuman life-forms. It is illustrated with 68 colour photographs. Running through the book is a common thread of concern for the environment, an appreciation for the arts, and rather idealistic ideas on simple ways of reversing the damage caused to the environment. Author Rohan de Soysa shows how this mindset is needed in the future so that we can achieve a balanced environment suitable for all life-forms, including human beings.

Preserving our air, water, soil, plants, animals, and the ecosystem as a whole is what is of real value. In order to realize a truly sustainable future, we must begin to respect other forms of life and, most importantly, the environment on which their survival depends.

About the Author:  Rohan de Soysa is currently active in the fields of art and the environment, and he has also been involved in photography, agriculture, industry, and trade. He became a trustee of the Sapumal Foundation in 1981, and he has been chairman since 2011; this charming place contains the work of the ’43 Group, the first modern art movement in Sri Lanka. In 1985 Rohan bought eighteen acres of secondary forest for his daughter, and today it is a sanctuary and the first community conservation project in the country.

This collection of sage commentaries speaks to the need for renewed respect and concern for the planet and for nonhuman life-forms who depend upon the earth for survival and flourishing.