The Malay Pioneers of Cricket in British Ceylon

The Thuppahi item on “The Malays of Sri Lanka” ……………………………… (https://thuppahis.com/2022/12/04/the-malays-of-sri-lanka-a-new-book/#more-68598) encourages me to elaborate, albeit inadequately, on the pioneering role of Malay personnel in the development of cricket in British times in the 19th century. On this issue my own work in the 1980s which led to the book People Inbetween (Colombo, Sarvodaya, 1989) can be supplemented by the information compiled by two indomitable cricket historians of yesteryear: SP Foenander and SS ‘Chandra’ Perera.

Contemporary enthusiasts should note that the rules of cricket in the British world in the early 19th century were quite different from those prevailing in the twentieth and twenty-first centuries. My interest, here, is not in the rules, but in the pioneers of the game in the British colony of Ceylon. These pioneers were personnel in the British administration and in the military regiments which were a pillar of British power in the decades where the invaders proceeded to take on the independent kingdom of Sihale in the 1800s and in 1815; and, thereafter, to fend off a rebellion in 1817/18 and to keep a weather eye on possible insurrections.

As it happened, the British military forces included Malay regiments. Let Chandra Perera’s work relay the story: here I draw on a section of his work headlined “The Malays at cricket” (1999: 29-30)

“After the Dutch capitulated to the British in the 1890s around 1100 Malay troops of the Dutch colonial government who had fiercely fought for the Dutch opted to join the British. They were absorbed into the Rifle Regiment formed by the British in 1827. There were about 2500 British troops and 1100 Malay soldiers on the island from the 1830s. The close association of the Malays with the British military personnel saw them take to the game early; the conquered Sinhalese were mere onlookers at the time.

There is a newspaper report on May 3, 1860 of a match between the Civilians (the members of the Colombo Cricket Club) and the Ceylon Rifle Regiment on the Rifle Regiment Grounds in Colombo (the old Malay CC Grounds, now site of the Slave island Police Barracks, Colombo 2). The Rifle regiment was composed of Malay soldiers (from Java)) but had British officers. The names of the Malays in the scorecard of the match are Jawadin (modern name Jawath /Jawadh), Miskin and Sourjah (two popular Malay names even today) and Doll (the modern version would be Dole). The Malays were, in the next 30 years, to become a team to contend with in local club cricket.

The formation of a Malay cricket club was inevitable given the way the Malays took to the game. [This occurred in 1872] …. In June the Rifle Regiment (by now an all-Malay eleven ) played the 2nd Battalion 25th Regiment on the Drill Ground (another name for the Rifle Parade Ground). ……

Some members of the Malay CC , the oldest Ceylonese cricket club, being formed in 1872

Note that the Malay CC secured the top position in the local competition in 1920 and are featured thus in the Janashakthi book … (p. 293)

This picture is also reproduced in Michael Roberts, Essaying Cricket, Colombo, Vijitha Yapa Publishers , 2006, phote No 3 .. with the following note:

… ” The Malay Cricket Club was formed about 1871-72, being the first of the many clubs composed during the late 19th century on ethnic lines (the Nondescripts CC being a notable exception, but not the only obe –for e.g. Melbridge CC and Bloomfield C & AC). AC Ahamath of the Malay CC was one of Ceylon’s best cricketers in the first two decades of the 20th century and was among those se;elctead by John Rockwood when Rockwood sponsored a trip to bombay in December 1919 to play the varuous gynkhana clubs (all ethnic) in a tournament. The Ceylon squad was composed of 7 Sinhalese, 2 Tamils, 5 Burghers in addition to Ahamath. The Mlay cc itself [had] toured bombay in 1907.” 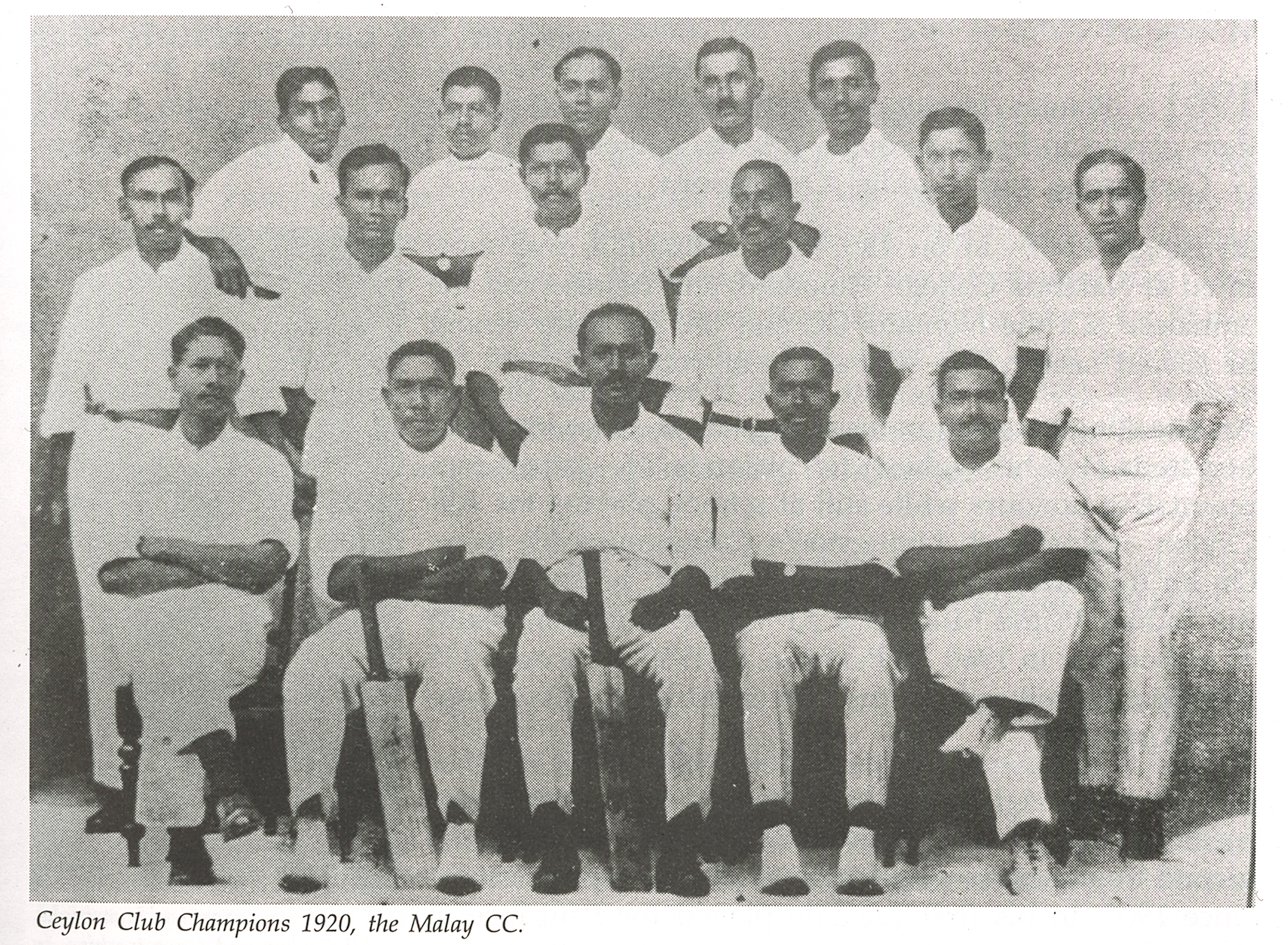 2 responses to “The Malay Pioneers of Cricket in British Ceylon”