Steve Smith had copped an absolute roasting from cricket fans and commentators after a horrible review during Australia’s collapse in the second Test against Sri Lanka.

The Aussies were bundled out for just 151 in their second innings on Monday in Galle, losing by an innings and 39 runs.

It was Australia’s first loss by an innings since 2016 and their first ever against Sri Lanka. Smith was one of the shining lights for Australia in the second Test after his unbeaten 145 in the first innings.

Sri Lanka destroy Australia in second Test in Galle
– [INAUDIBLE] 12 in the game. 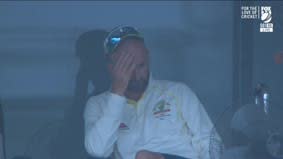 However the star batter went from hero to villain in the second innings after a horrendous review following his dismissal for a duck. Smith was trapped plumb in front by spinner Prabath Jayasuriya, but opted to waste a review in farcical scenes.

Replays showed the ball pitching and hitting in line and smashing into middle stump, making a complete mockery of Smith’s decision to review.

Cricket commentator Adam Collins tweeted: “I’ve seen a lot of bad reviews – they happen. But Smith’s one of the worst; totally lacking in broader match awareness with so many batters to follow and fielders around the bat.”

Former Victorian captain Darren Berry wrote: “That is a very poor review, need to be accountable and honest at both ends irrespective of the player absolutely plumb.”

Cricket writer Peter Lalor also labelled it “one of the worst reviews you will ever see”, while some fans joked that Smith should be banned for the horrible decision.