The first documentary attestation dates from 1324 when the Saxons revolted against King Charles I of Hungary and took refuge inside the citadel. According to archaeologists, the current citadel was built on the ruins of a former Dacian defense fort conquered by the Romans. The name of the citadel comes from Latin rupes meaning “stone”. From the 10th century, the citadel experienced a systematic expansion, so that in the 14th century it had a key strategic role, being the main linking point between Transylvania, Moldavia and Wallachia.

A popular legend in the area tells that Dacian king Decebalus committed suicide within the citadel,[1] during the Second Dacian War (105–106), when the citadel was known as Ramidava.

Rupea Citadel is situated in the west of Rupea, on a 120 m-high basalt massif.[2] The citadel is located on DN13, 70 km from Brașov, on the road to Sighișoara. The citadel is visited each month by more than 10,000 tourists.[3]

Rupea Citadel is one of the oldest archaeological sites in Romania, the first signs of human settlements dating from the Paleolithic and early Neolithic (5500 BC–3500 BC). Archaeological investigations have revealed objects from this era, testimony of settlements in the region: stone tools, pottery, funeral urns, etc. In Dacian times, on these places was raised the dava known as or Ramidava (after various historical sources); conquered by the Romans, Rumidava becomes the Roman castra Rupes (in Latin, rupes means “rock” or “stone”). The Roman castra Rupes was part of the Roman fortification belt defending the commercial area and routes linking Valea Târnavelor, Valea Oltului, Râșnov and Hoghiz. 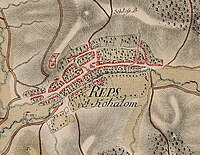 Rupea Citadel in the Josephine map of Transylvania

The first documentary attestation of the citadel dates from 1324, under the name castrum Kuholm, when the Saxons revolting against King Charles I of Hungary took refuge inside the citadel. The name Kuholm refers to the rock on which it was built: basalt. Between 1432 and 1437 the citadel was attacked and robbed by Turks, as later, in 1643, to be abandoned, after a devastating fire turned it into ruins. At the end of the same century, Saxons return to the citadel to seek refuge. This time, the citadel will be handed over to the Habsburg armies without armed resistance.

During the plague of 1716, the citadel was used as refuge for those who were not affected by disease, and in 1788 as refuge against Turkish invasion. The citadel was finally abandoned in 1790 after a severe storm that destroyed its roof. Since then, the citadel was left in ruins, although Rupea became in interwar period a powerful Saxon cultural center. During the communist regime, the authorities planned the demolition of the citadel in order to exploit the basalt that forms the hill. The last attempt to restore the citadel dates back to 1954, but the idea was abandoned. In the early 1990s, the citadel was in a sorry state, with only one of the defense towers standing. Between 2010 and 2013, the citadel has undergone a comprehensive restoration process, with all the seven towers and the peasant homes being restored.[3]

The citadel is classified in the list of historical monuments of Brașov County under the code BV-II-a-A-11769.[4]

Inside view, from the fountain to the upper citadel

Each is identified by a special brickwork belt, corresponding to different eras, marked by the evolution of weapons, siege techniques or level of development of the settlement and the seat on which depended the financing of work. In turn, the towers have an identity covered by an own name that, in part, betrays a certain feature (often related to the function) resulted from their historical development. These elements worn various sizes and architectural features: the oldest had battlements in rectangular zigzags (which have not been reserved), and the most recent had semicircular merlons, more decorative.[6] Their embrasures took the form of simple slots, and the openings for firearms were made with angles of fire as large as possible or special, to the base of walls, fit in prominent niches, with arrangements of stepped pyramids. Behind the walls, traces of brickwork betray the foundations of watch roads, sometimes on two levels.

Overview of Rupea Citadel at sunset

The first premise of the fortification system is the Upper citadel which dates from the prefeudal period, 10th–13th centuries.[7] It comprises the latest expansions, including the Bacon’s Tower (Romanian: Turnul Slăninii), specific to Saxon communities. Also here can be found the 59 m-deep fountain, the only source of water certainly identified in the citadel. The fountain was built in 1623, after a work of several months, during the princeship of Gabriel Bethlen. The upper citadel has an area of over 1,500 m2.[8] The entrance to the upper citadel was a narrow corridor, the gate under the Gunpowder Works’ Tower (Romanian: Turnul Pulberăriei). To the inside can be observed traces of rooms that served as homes for the refugee population in the citadel during sieges. The best-known rooms in the upper citadel are the Count’s room (Romanian: Camera judelui) and the Priest’s room (Romanian: Camera preotului). But these are very difficult to identify nowadays.

The Middle citadel was built in the 15th century and was enlarged in the 18th century.[7] Here can be identified the Tower with Bars (Romanian: Turnul cu Gratii), the Chapel (Romanian: Capela) and another pentagonal tower, unique in Europe, gateway to the middle citadel. The chapel is a large building (the last known restoration in 1718), with multiple roles, inside which must be arranged a Lutheran chapel, soberly decorated, after cult demands.

The Lower citadel was built as from the 18th century. From this period dates the house of citadel’s watchman (1850) and the military warehouse, built in the early 19th century.[7]

Rupea Citadel has the form of an ascending spiral (snail shell).[9]