Renuka Sadanandan, in Sunday Times, 22 September 2019, where the title is “Lanka’s friend in need and deed“

J.R. Jayewardene entertaining guests on the lawn of the President’s House once asked British MP Michael Morris if he smoked. When he replied no, the President inquired if his father did. Receiving a positive answer he presented Morris with a box of Cuban cigars, saying that President Fidel Castro regularly sent them to him. Back home in the UK, his father called to thank Morris for the cigars, informing him that he cut them in half as they were so strong! “You can’t cut Castro’s cigars in half Father,” he recalls his horrified protest. 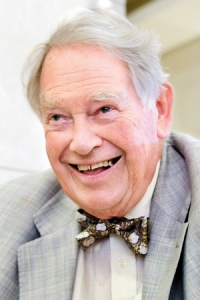 Michael Morris now Lord Naseby is a natural raconteur and stories about the people and politics of this country are remembered with obvious pleasure.  The Conservative  peer, now nearing 83 is well known as a staunch supporter and longtime friend of Sri Lanka, for his numerous interventions in the UK Parliament and other international forums when Sri Lanka was under a barrage of war crimes accusations. This week, on one of his many visits to the island, he was guest of honour at the Organization of Professional Associations’ annual sessions.

Indeed his book due to be published in February 2020, is all about this enduring connection. ‘Sri Lanka- Paradise Lost, Paradise Regained’ – The recollections of 50 years of a British politician with the people of Sri Lanka – will take the reader through not just the politics but the many little known aspects of a bond that has grown through the years.

It was back in 1963, that the young Morris was Marketing Manager of Reckitt and Colman, and spent eight months in a flat on Turret Road (now Dharmapala Mawatha) often finding time for a game of tennis and a rice and curry lunch at the home of his friend Anandatissa de Alwis, cooked by the latter’s mother. He toured the island extensively, visiting wholesalers and leading retailers in major towns and remote villages who stocked the company’s popular products such as Dettol and Disprin. There is little he hasn’t seen, he smiles, recalling the bustling market and beautiful Fort in Jaffna before the devastation of war, a close encounter with a cobra in Polonnaruwa, and making a hair-raising ascent to the top of Sigiriya at dawn at a time when there were no railings to hold on to.  Those were the days when overnight stays were at rest houses and where there were none, he wrangled circuit bungalows, after writing to the Ministry of Health about the nature of his work.

When he meets the Sunday Times on Thursday, he is a trifle windswept having ascended the newly opened Lotus Tower, Colombo city’s newest attraction and viewed the rapidly transforming skyline. On his last visit two years ago, there were two high rises, “this morning I counted 25,” he marvels. Dapper as always, sporting his signature bow tie (a habit he adopted from his Cambridge days),  he will meet the President later in the afternoon.

He took to politics after he returned to the UK from Ceylon, that first foray in 1966 unsuccessful though.

He says that perhaps it was during those many discussions he had with Anandatissa de Alwis who was then head of advertising firm J. Walter Thomson as he prepared to launch into politics that he picked up the bug too. “He lit the lamp.” De Alwis would go on to become Speaker of Sri Lanka’s Parliament, Lord Naseby Deputy Speaker of the UK’s House of Commons.

His first glimpse of the island though was from his stamp collection, the exotic stamps from Ceylon taking up a whole page in his album, which he treasures even today. In his boarding school days he had roomed with an Indian, Srinivasan (he would go on to be Foreign Secretary) and when he later visited India he was already on familiar ground with the subcontinent. In 1955, his father took up a job as architect for the Government of Punjab and visiting him in Lahore, he spent a blissful vacation, learning to fly, piloting an Auster Aiglet and a Cessna, dual seater aircraft, doing navigational trips to the border of Pakistan and Afghanistan. Not surprisingly he applied to join the RAF when called up for compulsory military service and later spent time in Canada as part of a very international NATO contingent. After gaining an Economics degree from Cambridge he returned to the sub-continent taking up a marketing job at Reckitt and Colman. He had fallen in love with a medical student meanwhile and on his request, she took her international exams so she could work abroad.

Stationed in Calcutta at the company’s regional headquarters, he was Marketing Manager Eastern India. He learnt Hindi with a munshi ( teacher) “I have O’L Hindi,” he chuckles and was quite settled there until a Monday morning, when he was summoned to his boss’s office and told he had a promotion, a salary raise and a new job in Colombo. He needed to move with wife, child and dog by Friday.

His doctor wife Ann was not granted a work visa but did some volunteer research with a pioneering woman doctor here Siva Chinnatamby he recalls. So though brief, their stay was filled with memorable experiences, not least hiring an elephant to haul the new ‘tabletting’ machine to their Ratmalana factory. Another memory- launching the Goya fragrances from his Turret Road flat overlooking the Victoria Park (Vihara Mahadevi Park) and having his hair cuts on the balcony!

After entering Parliament in 1974 as the MP for Northampton South, he worked on forming the All Party Parliamentary Group (APPG) on Sri Lanka and brought a British Parliamentary delegation to Sri Lanka around 1975, visiting almost every two years thereafter. Among those delegations was the Labour MP Betty Boothryd, later to be Speaker of the House of Commons. Since then he has visited many times as an election observer – general confidant and supporter of Sri Lanka. Boothroyd and former Lankan President Chandrika Kumaratunga have contributed the foreword to his book.

“I have never had any business connections, I have had many offers. I don’t take sides between the two parties and I try and help whoever is the government of the day,” he says.

Among those visits was one soon after the tsunami in 2004 with his wife and travelling to the affected areas, he got his whole family from his eldest doctor son involved, to have a British travel advisory that warned of the fish eating human flesh lifted following a WHO clarification. Since Bedfordshire where they lived  was also known for lace making, his wife was able to help the devastated Beeralu lace makers of the south to rebuild their livelihoods through contacts with the UK.

Another significant intervention was over the Victoria dam, where the UK government’s aid was nearly cut when Prime Minister Margaret Thatcher decided that expenditure was too high. He made a presentation to her that highlighted the benefits that would accrue vis-a-vis irrigation and power supply and the role of the British firms involved. “I said I will stay quiet until you make your decision but I will not be  quiet after you make it if it’s the wrong decision.”  She called him a week later to say she had changed her mind. The project went ahead with British firms such as Balfour Beatty and Nuttall and Mrs Thatcher was here to open the dam.

A visit to the Port City on this trip has him convinced that the time is right to find equally enlightened British investment for it.

Cricket figures not surprisingly and he played his part in helping Sri Lanka gain Test status. He recalls Gamini Dissanayake, President of the Cricket Board visiting his home in Sandy, Bedfordshire, discussing strategy and tactics to lay the groundwork and rally support with the MCC. He is particularly pleased that he has been able to obtain permission from the MCC and from  the widow of the scorer to use a photograph of Sri Lanka’s historic first Test at Lords in his book.

When in 1997, the peerage was announced, he was in a quandary. In the normal course of things, he would be Lord Morris of Sandy but the Garter King of Arms who is responsible for registering new names advised him strongly to change his name, given that there were five Morrises in the House of Lords, including one other Michael Morris. “Go away and come back with a name. It must be a place that has at least 1500 people and it must be somewhere or something you are associated with” he was told.

It was an archivist in Northampton he knew who made the suggestion that had historical resonance-in the Battle of Naseby (June 14, 1645) between the troops of King Charles 1 and Cromwell’s Army, all the wounded were placed in churches – the Parliamentarians  in one, the Royalists in another. So you can claim that you cover both parts, she said. The population of Naseby also fit -1,800.  Still he was adamant that he wouldn’t take the name unless the people of Naseby approved and went before the local council which gave him their consent. He is today a patron of the Cromwell Trust along with John Major and a member of the Naseby Battlefield Trust dedicated to the area’s conservation.

There is a little corner of Sri Lanka that is also Naseby, he reveals, recalling how around 2012 his wife having heard of a tea estate by the name, they went to the Tea Board who hadn’t heard of it but promised to check. On their next visit, there was news – Naseby was not a separate estate but a sub-division of the Pedro Estate in the Nuwara Eliya. “There are two stones there with the name, one with the details about who planted it,” he says, still intrigued, and hopeful that someone will come forward to reveal why a Scot named a misty hillside here after a little British village or a long lost connection with that historic battle. 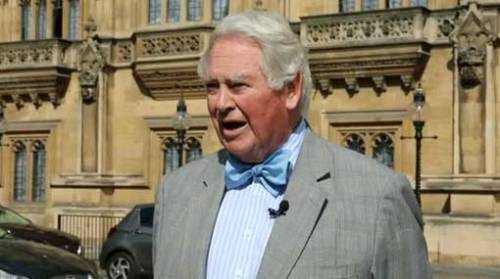 Shamindra Ferdinando: “Lessons from Lord Naseby and Sangakkara on the Tales of War highlighted-by Ferdinando,” in https://thuppahi.wordpress.com/2018/11/28/lessons-from-lord-naseby-and-sangakkara-on-the-tales-of-war-highlighted-by-ferdinando/

One response to “A Friend Indeed! Lord Michael Naseby’s Story of Sri Lanka … with Sri Lanka”