Allen Kim of CNN, in https://edition.cnn.com/2019/07/29/world/gandhara-scroll-buddhism-trnd/index.html

The Library of Congress made public a rare 2,000-year-old text of early Buddhism on Monday, and it offers a glimpse into early Buddhist history during its formative years.  The scroll originated in Gandhara, an ancient Buddhist region in northern Afghanistan and Pakistan. Only a few hundred Gandharan manuscripts are known to scholars worldwide, and each is vital to understanding the early development of Buddhist literature. For instance, using linguistic analysis, scholars study these manuscripts to chart the spread of Buddhism throughout Asia.

The Gandhara text is narrated by Shakyamuni Buddha, the religious leader also known as Siddhartha Gautama, and tells the story of the 13 Buddhas who preceded him, his own emergence and the prediction of a future Buddha. Information on how long each Buddha lived, the social class they were born into and how long their teachings endured are all chronicled in the text. 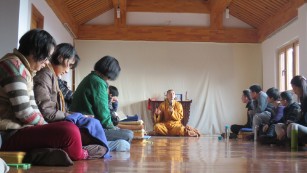 “This is a unique item because it is very old compared to similar manuscripts and, as such, it does bring us, historically speaking, relatively close to the lifetime of the Buddha,” Jonathan Loar, reference librarian in the Asian Division at the Library of Congress, said in a statement.
The library’s scroll retains nearly 80% of the original text, with only the beginning and end missing. Most other Gandharan scrolls known to scholars are more fragmentary.
“I wanted to find a way to share this incredibly unique item with the public,” Loar told CNN. “The scroll is very well-preserved thanks to the work of the Library’s conservators, but it is still incredibly fragile.”
Purchased in 2003 from a private collector, the scroll is one of the most complicated and fragile pieces that the Library of Congress has ever treated. It took conservators several years to devise a treatment strategy, and they practiced unrolling techniques on dried-up cigars. The treatment of the text would’ve never been possible if not for the unique conditions in which it was stored.
“One reason is that Gandharan scrolls, like the one at the Library of Congress, were typically buried in terra cotta jars and interred in a stupa, a dome-shaped structure often containing Buddhist texts or relics,” Loar said. “Another reason is that the relatively high, arid climate of the Gandharan region helps preserve materials like manuscripts on birch bark.”
Although the manuscript itself is too fragile for public display, by digitizing the text, the library is able to share this important piece of history with the public.
******