Where End Goal and Zeal produce a Deadly Cocktail

Chandre Dharmawardena, in Colombo Telegraph, 6 April 2019, where the title is “Why Do “Educated” Youth Join Extremist Terrorist Movements?”

It is often asked  why educated youth “coming from good homes” join extremist organizations. Simple  references to “brain washing”, or the stupidity of the young are no explanations. There is no scientifically recognized   process called “brain washing”. It is also  naive to assume that  educated youth  join the IS (Islamic state)  to go to heaven and get their 21 virgins! Many youth radicalized in British Universities ended up fighting for the ISIS. At least one of the Sri Lankan Muslim Kamikazi had a British training, had four children, a flourishing business and lived in a million dollar home in Colombo. A British education in a narrow subject like “information technology” not touching any  broad scientific or cultural subjects, given in a British “red Brick” university can have no effect on already acquired belief systems. Don’t our “most educated” ministers go to Tirupathi, India,at the drop of a pin?

These radicals are no different from the young intellectuals of an earlier generation who believed in a simplistic theory of capitalists versus the workers, and how the workers would unite to bring down the capitalists and create a classless society where even state power has disappeared!They believed that “THE END JUSTIFIES THE MEANS” –so wehadStalin, Mao Tse Tung, Pol Pot, Kim Il Sung, countless Left-Terrorist Maoist-Guevarist-Naxalite groups, andWijeweera’s JVP in Sri Lankakilling innocents to achieve their “objective”.This objective is given a historical destiny by dialectical materialism formulated as “historical materialism”. Contrary to the predictions of historical materialism, these movements have only produced ghoulish Gulags.

Similarly, these “brain-washed” young Muslims are educated in the Islamic fundamentalist view of the world consisting of Muslims (good), and infidels (bad). Many educated Arabs do not believe that the 9/11 World Trade Center attack was done by Arab Kamikazes. They think it was a put-up job by Jewish groups and the Bush government to give them an excuse to attack the Oil Rich Middle Eastern countries on the economic front, and to relaunchthe Crusades against Islam. This is the rationale for thecounter-attack on luxury hotels frequented by Westerners, and on Christian Churches.

Just as Dialectical materialism callsfor a revolution leading to anecessary final state which is an article of faith of Marxists, Islam defines that history must necessarily lead to the Islamic state after a Jihadic step. The “holy war” replaces the revolution of the Red Comrade. The historical destiny taught to young Muslims by impassioned Arabic Teachers who have come from the Middle East is as simple and clear as the JVP five lessons. Their role is to establish the Islamic State, with everyone practicing the Sharia law which encompasses not only morality, but economic activity as well – a complete ideology is sold. 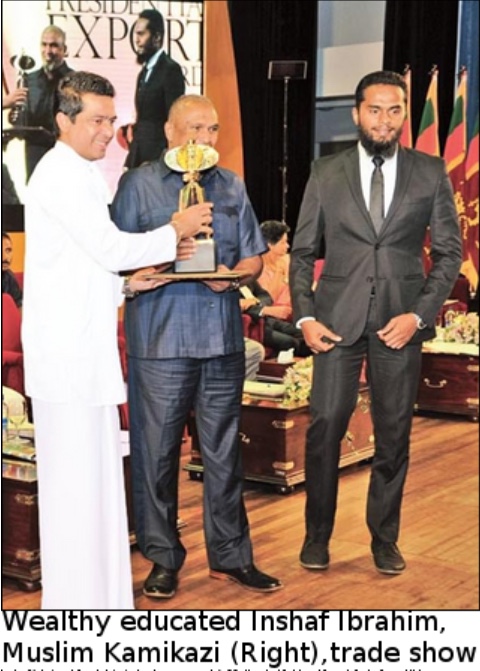 Just asmany Sri Lankans, or even ministers are over-whelmed enough to readily accept ideas cooked upin the West, because they are from the West,these young people are also over-whelmed by “renowned” and fiery teachers from the Middle East who paint a glorious picture of the old Caliphate.The idealistic young Muslim has a clear jihadist mission, taught to him by these fundamentalist “international teachers”. Achievingthis designatednoble cause,the Islamic Caliphatein the name of Allah becomes their mission. Achieving thisEND is justified by ANY means whatever. It is a sacrifice that they make, in much the same way as“rathu sahodarayas” (red comrades) are ready to fight the capitalist army and die in the process of the revolutionary capture of the state by the “working class”.

The young university students who readily absorbed the “five lessons” of the JVP, although almost stupid in content, attempted to overthrow the legitimate government because the message fitted in with their pre-conceived notions.These notions were aboutthe need to change the economic framework by “hook or crook”, hammered into the Sri Lankan youth by the LSSP and CP politicians who came prior to the JVP.The tremendous disparity between their power and state power seemed irrelevant to a just cause.

The early Marxists in Sri Lankahad fomentedthe trade unions to rise in militant “hartals”,hoping to capture power. They were sure of being the “Bolsheviks” who will replace the “Menshevick”government of Bandaranaike. So, the LSSP, a revolutionary party did not worry about popularity at the polls. Dr. Osmond Jayaratne, and Engineer C. B. Wijedoru, both central committee members of the LSSP assured me that Language Paritywas a policy strategically crafted to the revolution using unions with more than 50% Tamils, and not designed for elections. When they abandoned the “revolution” and joined Mrs. Bandaranaike, they jettisoned parity and embraced the majority language, as one language is more efficient for the classless, divisionless, unethniccommunist state.

In the case of the radicalized young Muslims, they too hope to change what they see is an utterly immoral world. The world must conform to the draconian morality taught to them by the fundamentalist Arab teachers. Martin Luther had found such a moralistic message explosively successful in an earlier era. These young people find an outlet to their moral and idealistic energy, and an identitythorough these extremist organizations.Their parent’ssociety has failed to provide them with valid idealistic objectives suitable to the 21st century, and allowedextremist teachers to infect them with a new passion. This process is not “brain washing”, but more analogous to the spread of an infection of virulent memes.

The Ilanaki Tamize Arasu Kadchi (ITAK) declared in 1949 that the Ceylon Tamils –a mere 10% of the population – must have an “exclusive homeland” in Ceylon, and that their struggle is to establish their own Raj where “they will manage their own affairs”.The leaders were wealthy“upper-caste”land owners of the North, but living in Southern Ceylon, and in the best parts of Colombo. They blamed the southern politicians (them excluded) for all the problems of the North. This was an an inflammatory, racist and exclusive ideology crafted to attract the fervour of the youth, with some of its leaders identifying with the Chola empire.The move towards Swabasha with the cry of Sinhala ONLY became fuel for further polarization.By a strange twist of history, Vaddukkoddai, a town named‘Batakotte’till the dawn of the 20th century because it was a Sinhalese garrison town against Chola invasions,was the venu of the Vaddukoddai resolution. It called forseparatistarmed struggles to achieve“Eelam”, the ethnically exclusive Tamil homeland.

Educated Tamil parents with liberal values could not understand why their well educated children joined violent Eelamist racist movements.In the end the parents themselves were infected by the same bug, when the majority reaction erupted into a horrific pogrom in 1983, and escalated into brutal war.Notably, Jeyaratnam Wilson’s political writings had evolved from its empirical approach to a separatist stancewithin a dozen years, moving to support a view of Sri Lankan history about Tamil homelands that he would have vehemently rejected in an earlier decade.

The same phenomenon exists in the highly literate world of Judaism. The young fundamentalist Jews in Israel fight and kill to build Zion. They too are driven by an utterly medieval, jingoist Judaism that underpins Likud ideology.The “moral right” of the Zion or the Caliphate, the dialectical necessity of the communist state, or the rights of anEelamisthistorical claim, these overshadow mere human rights or, say ,Palestinian claims to existence. Leaders of Zionist terror organizations like the IRGUN, e.g., Menachem Begin and Benjamin Natanyahu, became prime minsters with US support.Another terrorist group, LEHI,proclaimed that the “Armed struggle is the duty of all Israel; every Jew has to be a warrior. Religion … raises the armed struggle to a ritual above any other facet of human endeavour. Hallelujah with machine guns”! The Zionist terror, at first directed against the British, was later directed against the Palestinians who suffer enormous aggression but remain protected from the UNHRC by the Western powers. A more just British policy could have produced co-existence between the Israelis and the Palestinians. The Palestinians have mounted equally horrific counter-terror groups like the Hezbollah who are funded by the Arab states. All these terror organizations easily recruit their educated youth to engage in terror. A leader of the LEHI, Yitzhak Shamir served as a prime minister of Israel. The end justifies the use of violent means for those in the faith.

The Zionist terrorist movements against the British arose during a time when Nazism with its credo of violence arose in Europe, misrepresenting Darwinian evolution and using it as a theoretical underpinning. This misrepresentation of Darwin, initiated by literary men like Tennyson who pictured nature as being “red in Tooth and Claw”, is scientifically incorrect. Darwinian evolution works when a large number of genes and cells COOPERATE to take advantage of fitness landscapes, and not when acting by competition.I have discussed this at length in my book “A Physicist’s view of Matter and Mind (World Scientific), Chapter 3” and elsewhere in that book.

Dr. Jane Russell, in her ever topical, sadly no longer available book “Communal Politics Under the Donoughmore Constitution, 1931-1947 (Tisara Publishers) ” writes that nationalist leaders like SWRD Bandaranaike and GG Ponnambalam were glowingly referred to as “pocket Hitlers” by their respective admirers in the two ethnic camps. Prabhakaran with his Child soldiers wearing Cyanide capsules graduating into Kamikaze cadre was the final product of one such nationalism. Its Hindu ideology, nourished in ultra-conservative Jaffna Christianity makes Shiva into adestroyer and the Christian God into a partisan Shiva.

Societies that fail to provide for the idealism and rebelliousness ofyouth through opportunityin adventure, in thearts, sciences and professions become the theater of extremist ideologies. Just asyoung plants need protection against insects, weeds and extremes of weather during their early growth, young nations needprotection. Even flourishing “open societies” cannot allow subversive forces supported by external moneyto crush the traditional structures in their societies.

Sri Lanka had evolved a compassionate society that gave refuge to all faiths since Asokan times, with near equality to women and “lower castes”,when compared with other ancient societies.No heretics were burnt. The END, however desirable, could not justify THE MEANS used to achieve the end, since the righteous path was the essential element of Buddhist and Jain doctrines, and in forms of Hinduism that evolved under teachers like Nagarjuna.Lanka’srulersgave asylum to Catholics and Muslims in the face of Dutch-Lutheran repression. More recently, the nation’s ancientwholesomevalues were jettisonedin favour of virulentdoctrines coming from the political left, and from the political right which uses religion to anchorits claims.

The Irish and Tamil diaspora fed and fomented the Irish and LTTE violence. The US and its NGOs feed and foment disaster capitalism in young nations and interfere with their elections by propping up US favorites. In such operations, the‘manifest destiny of the US’overshadows all human rights.Similarly, the fundamentalist oil sheiks build Mosques, Madarassis and push fundamentalist agendas causing dissension in Myanmar, Sri Lanka or elsewhere, while heaping the blame on the “intolerance” of the majority community.These ideologies reject dissent and open discussion. They threaten to eliminate the other by force.

But many politicians, tempted by money and influence, allow the camel into the tent, and then it is too late.