Gananath Obeyesekere, in The Island, 30 January 2016, where the title is “A note on Katikaavatas or promulgations by Sri Lankan kings,” … http://www.island.lk/index.php?page_cat=article-details&page=article-details&code_title=139524

In view of the controversies on the right of monks to unilaterally regulate the Buddhist order (sāsana) let me state that unlike in medieval Europe there were no Pope’s in Sri Lanka and it was the kings who had the final say in matters of the reorganization of the Sangha, admittedly with the consent of monks. These promulgations or katikāvatas were established for the purification of the order by kings who consulted distinguished monks before any promulgation was formulated. I am indebted to the important study of the subject by Nandasena Ratnapala, The Katikāvatas: laws of the Buddhist order of Ceylon, published in both Sinhala and English in 1971 which ought to be widely distributed and made known to the Buddhist public.

The katikāvata of Parākramabāhu formalized a set of rules for monks that in his conception had to be adopted by all and consequently it set the stamp for several future katikāvatas. Further, this katikāvata alone is engraved on a rock slab at Parākramabāhu’s magnificent Uttarārāma (Gal Vihāra), ensuring that it is going to sit there for quite some time! Although the ideas underlying the katikāvata are foreshadowed in the Pali Cālavaāsa, all the katikāvata by Parākramabāhu we now have are in Sinhala and formulated under the inspiration of an ascetic monk Mahā Kassapa. The key figure responsible for formulating the katikāvata, namely, Mahā Kassapa, is simply not mentioned in the Cālavaāsa. Yet there in no doubt that the Parākramabāhu katikāvata is the authoritative statement, formulated by a distinguished monk and engraved in stone in Sinhala by the king’s order. This clearly recognizes that the promulgation is under the inspiration of “the congregation of Buddhist monks resident in the Udumbaragiri monastery with Mahā Kāsyapa Mahā sthavira as their chief ….”

The katikāvata reiterates the Cālavaāsa position but in blunter fashion when it says that after the dispensation of Valagam Abha (Vattagamani Abhaya or Valagamba) “the Buddhist Fraternity remained disintegrated and the religion also continued its course of decadence” until there came to the throne the mighty Parākramabāhu. It should be remembered that a king cannot order monks to formulate a katikāvata; the monks must do it themselves following the broad instructions of the king. However, the king has the right to expel monks and here Parākramabāhu invokes the example of Asoka who inspired by the elder Moggaliputta “crushed out the sinful monks; suppressed the heretics; purged the religion of impurities ….” And then “in like manner His Majesty also enlisted the services of those (Udumbaragiri) bhikkhus and, removing from the Master’s religion many hundreds of sinful monks [aneka āata pāpabhikāān], brought about a rapprochement of the three fraternities and a coalition of them into one single fraternity – a reconciliation which former kings, despite their great efforts were not able to effect ….”

Udumbaragiri is better known as Dimbulagala and was a long term residency of monks belonging to the vanavāsin (forest dwellers) in contrast to the grāmavāsin, or village monks. In addition there are more formal terms expressing the same idea: vipassanā dhura (the way of meditation) and the grantha dhura, the way of learning, both terms used in the katikāvata. Learning and meditation were not fixed categories but interchangeable although the latter was the overwhelming preference for grāmavāsin or village monks. The emphasis however in the katikāvata is on the “code of disciplinary injunctions.” Many of these injunctions are derived from the Vinaya Pitaka and Sinhala commentaries and were probably well known to the Udumgaragiri monks. It seems to me that this katikāvata is a compendium of rules and regulations associated with the Udumbaragiri monastery but they are also rules that any ascetic order then and now would be familiar with.

The full text of the king’s katikāvata is found in the well-known “Rock-Inscription of Parākramabāhu I.” Here I will mention a few features that might interest the present readership. In addition to the kind of monk decorum favored in Buddhist monasticism there is also considerable emphasis is on the ascetic disciplines favored by vanavāsin monks. Many of the rules are not especially difficult to observe or implement. For example: “No permission to enter the village at wrong times should be given to these [novices and monks] on any business whatsoever” but in reality a lot of exceptions were in fact granted as for example the need to beg for food in order to support parents or to beg for medicine to help members of the order. Some of the rules are formulated to avoid sensual or sexual contact. For example: one should not “stroke the head of a boy” or brush against the body of a monk, not even with their robes. “He should never at any place put his arms round a boy’s body and console him.”

We are now confronted with the paradox of Parākramabāhu’s injunctions: that is the rules are not decided by the king, something he cannot do but on the advice of the monks of the Udumbaragiri monastery, although the actual expulsion of the monks for transgressions was the king’s duty when he “expelled many hundreds of sinful bhikkhus from the Sasana of the Master.” What strikes us about that katikaavata is that these rules are framed for all monks even those given to scholarly learning (grantha dhura). The katikāvata of Parākramabāhu is a very limited code that focuses for the most part on the ascetic orders, demanding that their rules be followed by members of the sāsana. Given the great king’s authority engraved in stone it would be impossible to erase its impact.

Hence all of the four known katikāvata have been influenced by it from the time of Parakrambahu II (1236-70) and Kirti Sri Rajasinha (1747-82) followed by Rajadhi Rajasinha (1782-98). Let me remind the reader these extant katikāvata documented by Ratnapala were surely formulated by major kings in consultation with specified learned monks although we lack documented evidence. I shall briefly refer to the katikāvata of Parākramabāhu II, truly one of the great kings of Sri Lanka. In my opinion a model king who according some accounts freed prisoners and sent them back to their South Indian homes, abolished torture, and even abolished the death penalty according to some accounts.

Parākramabāhu II’s policy was more liberal than that of his predecessor such that he could proclaim that the Sangha now and in the future may “diligently engage themselves in the Grantha and Vidharsana dhuras,” namely the classic traditions of both learning and meditation. His is an exceptionally long katikāvata and describes in great detail the king’s own contributions to the welfare of the Sangha. What is striking about these rules is that once again the king is acting on the advice of a learned monk Maha-Kasyapa-Maha-sthavira. It is important to realize that this katikāvata and the two that follow are tuned to the conditions of time and place. Thus: “When accepting male and female slaves, land, tanks, cattle and buffaloes a well-disciplined wise bhikkhu should be (first) consulted and those (slaves etc.) should be accepted in the manner indicated by him.”

A final note: some of the rules embodied in the katikāvata were also accepted by the other Theravada orders in Southeast Asia and it would be important for both monks and concerned lay persons to look at current practices in those Theravada societies, especially Thailand with its own king and with whom Sri Lankan monks had historic connections and also Burma with whose monks were invited on two occasions when the ordination had lapsed in Sri Lanka.

A NOTE on Parakrama Bahu’s “Religious Reform” from Wikipedia** 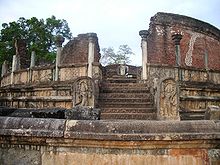 Parākramabāhu’s Temple of the Tooth

During the reign of king Vatta Gamini Abhaya (Valagamba, 104 BCE, 88–76 BCE), the sangha of the country had divided into three rival orders—the Theravada orders of the Mahavihara, Abhayagiri vihāra and Dakkhina vihara.[53] One of Parākramabāhu’s ambitions was the reunification of these groups into one order, as had existed at the time of Dutugamunu. Furthermore, much of the sangha had become corrupted over the years, with bhikkhus marrying and having children, and in many cases behaving much like upāsakas in their pursuit of worldly gain.[54]

Around 1165, a council was called in Polonnaruwa to discuss the reform of the sangha.[6] Parākramabāhu’s chief agent in the enterprise was to be the Mahathera Kassapa, an experienced monk who “knew the Tipiṭaka and was exceedingly well versed in the Vinaya“.[55] There was immense resistance to Parākramabāhu’s efforts, in particular from the Abhayagiri sect who now adhered to the Vetullavada tradition, who the king found to be particularly corrupt. Many monks moved abroad rather than participate in the reforms, whilst others simply abandoned the cloth and returned to lay life. In this they may well have been encouraged by Parākramabāhu, who seems to have felt that the “purification” of the priestly orders depended as much on the expulsion and exclusion of the corrupt as it did on the rewarding and encouragement of the orthodox.[56] There are several references to individuals being given “lucrative positions” in order to keep them out of their respective Orders.[57] Finally, the king summoned the leaders of the sangha on the island once a year, centering the visit on a ritual on the banks of the Mahaweli river—possibly a practical means of keeping up-to-date with their progress and their standards.[56][57]

Following the crushing of Queen Sugala’s rebellion in 1157, Parākramabāhu had the Tooth Relic and the Alms Bowl Relic brought to Polonnaruwa; the former was placed inside a jewel in the Temple of the Tooth Relic in Polonnaruwa.[58] Such constructions became a hallmark of Parākramabāhu’s reign; his buildings for the sangha are described in great detail in the Culavamsa and comprise an impressive body of work, often accompanied with inscriptions stating his intentions and accomplishments, such as at the Gal Vihara.

Nagirikanda stone inscriptions as EXAMPLE OF THE DECIPHERING REQUIRED — http://lankapura.com/2010/07/nagirikanda-inscriptions-sri-lanka/