Walter Keller: A German with Lanka in his flesh and bones

I: “From people to places, the bond will always bring him back” – by Duvindi Illankoon in the Sunday Times 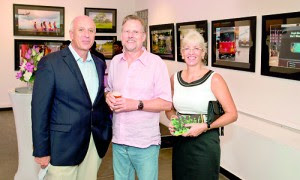 Walter Keller (in middle) at on of his photographic exhibitions

Back in 1977, Walter Keller-Kirchhoff was a 25-year-old Economics student fulfilling a young and carefree impulse to travel. He came to Sri Lanka on a little Volkswagen aboard a ferry, imagining it to be just another stop on his Asian tour. Life has a way of surprising us and Keller was no exception-almost four decades later he sits in an office down Jawatte Avenue on a sweltering Colombo morning, asking us if he can turn down the air conditioner because “it’s a little cold”.

Perhaps some would recognize Walter more for his colourful photographs of the island, so often exhibited in its galleries. Most would draw the connection between the 62-year-old and his work with the GIZ (German Development Cooperation) in Sri Lanka. Yet there are those individuals who would simply remember him as the sudu mahattaya who helped them find a footing in the world. Whichever way you look at it and however you may know him, there’s no denying that Keller was a live spark within his circles.

It all began in the late 70s, back when he was a student in awe of the country’s multicultural diversity and even more varied potential for landscape. When you’ve been here once there are no ifs or buts about returning at some point, he smiles. “Even when I returned to Germany to finish my degree I knew I would come back.” Sure enough, he was back in 1978 following the completion of his degree for a very special cause-the opening of a technical training institute in Ragala.

Keller had spent quite some time among the country’s hilly estate communities and was acutely conscious of the need for estate youth to have an alternative to going into their family occupation. Back in Germany, he used his time to network and raise funds, eventually returning to Ragala where he built the institute with Shramadhana (community work) and the help of his local friends, in particular one – Dushy Perera– the duo has been friends for just as long as Keller has been in the country.

His memories of Sri Lanka in the late 70s and early 80s are still fresh. “I remember coming to Colombo for ‘posh lunches’ at the Akasa Kade,” he laughs. “Personally though, Raheema’s was-and still is-my favourite place for a spot of lunch.”

During his time running the institute, and subsequently his decade long tenure with the GIZ in the country’s North and East, Keller spotted a need for effective communication between those of different ethnicities and communities. At the technical training institute instruction was in both Sinhala and Tamil, and it served as a platform for young people from different communities to get to know each other. With GIZ Keller pioneered the STEPS programme, or Skills Through  English for Public Servants, a self-explanatory moniker that trained over 4000 professionals employed in the private sector in the North and East within a matter of four weeks.

He returned to Germany in 1984, entrusting the technical training institute to some capable friends in Ragala, where it still thrives today. Back in the homeland he embarked on a career as a freelance journalist and photographer, and for almost 20 years he indulged a love for capturing people and places. Trips to Sri Lanka were still a frequent occurrence though, especially due to a posting as the South Asian correspondent for selected German broadsheets. “I never lost touch with the country,” he reflects. “Small wonder I eventually came back.” It was on one of these trips back that the GIZ in Sri Lanka touched base with him about serving as a consultant for a few months in assessing the feasibility structure of some projects. “I didn’t hesitate!”

A few months turned into a year and the year multiplied itself a few times over. Keller made his residence in Trincomalee, where he would wake every morning to the sound of the gulls swooping over the aquamarine waters of the coastal city. This view from his verandah is a frequent subject in his photographs; sometimes they’ll even have fisherman seeking their catch at the crack of dawn. “You’re never bored.”

From here Keller cast the net quite far, but he finds the lion’s share of his work concentrated in Trinco itself along with Jaffna and Batticaloa. During his tenure with GIZ, he was part of a team that initiated a public redress system for the Northern and Eastern provinces, whereby people are able to air their grievances effectively with minimum red tape. This, along with STEPS he considers two of his biggest accomplishment with GIZ. STEPS in particular is what gets him enthusiastic-the idea of using English for better communication and as a link language within the public sector is nothing new but he will tell you that it was the nature of the programme that made the difference. “We managed to convince the authorities to give us their employees for four weeks because you can’t expect anyone to learn the nitty gritties of a language over a weekend” he says. Once trained, these employees would become ‘change agents’ in their respective divisions. Keller’s also pretty happy with the equality for everyone aspect of programme, placing as it does senior, middle and lower employees at the same level. The programme continues to date, having now replaced the former instructors with proficient locals able to handle the task at hand just as well.

In the midst of all these the wanderlust in him saw Keller travelling extensively within the country, trekking through Horton Plains and driving down the dusty roads of Akkaraipattu. Don’t ask him to pick a favourite because he won’t, but he does have a penchant for the many quaint islands of the Jaffna peninsula and the beaches of Uppuveli in Trincomalee. Seruwila is a photographer’s heaven, he shares, as is Pottuvil. There’s a spectacular stretch from Akkaraipattu to Pottuvil that will keep you on your toes and a little known road from Wellawaya that has some of the best sights in the country, we’re told. It really goes without saying but the trick is to wander off the beaten track. “I was fortunate enough to travel extensively thanks to my work, but it’s something anyone can make time for.” He’s standing in front of a giant map of the island now, tracing his fingers across the many groves he has seen in real life and through his Canon lens. “There’s just so much to see. It never ends.”

It certainly never does, but some good things do have to come to a close. Keller returned to Germany at the end of last year, having ended his unexpectedly long term tenure with the GIZ. It’s time to go back, he says simply. When he’s back in Germany he’ll maybe set himself up as a freelancer once again, and who knows where his adventures will take him next? Keller only hopes they treat him as well as Sri Lanka has.

Walter Keller-Kirchhoff has committed himself to working and assisting the people and society within Sri Lanka for over thirty years through several German aid agencies linked to the government of Deutschland. In certain ways he is a reminder of that wonderful man, Ben Bavinck. Keller’s deep engagement with the country has also found expression through his professional photographic capacities. It is my privilege to provide the world with a glimpse of his capacities – and thus of landscape and people – through his camerawork. 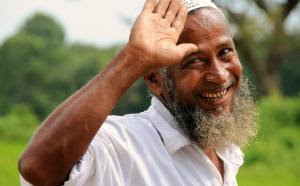 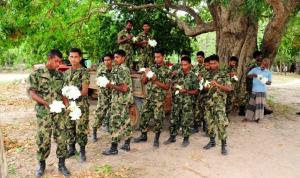 2 responses to “Walter Keller: A German with Lanka in his flesh and bones”