When I came across some ‘new’ material[1] of great import relating to KP Pathmanathan’s valiant efforts to extricate the LTTE leadership from their deteriorating military situation in early 2009 and to whisk them away to Eritrea with the active support of the great powers, and then reiterated my longstanding criticisms of the Western powers’ imperial effrontery in a fresh article this April,[2] I was surprised to receive an email note out of the blue from Stephen Champion in March this year 2020 – one wholly supportive of my slashing criticisms of the West. 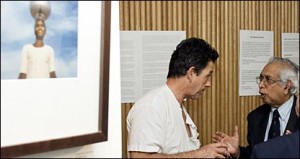 I assumed that Champion was writing to me from UK and was mighty pleased because I was aware of his enterprising camerawork in trying and dangerous conditions in the late 1980s and have a copy of at least one of his pictorial works.[3] I decided to seek out more information on Champion via Google and immediately chanced upon Saroj Pathirana’s report in the BBC Sandeshaya programme describing an event mounted by Amnesty International in July 2008 displaying some of Champion’s photographic collections (see Pix above). Adhering to the principle of progressing step-by-step in temporal order, I placed this item within my Thuppahi site on 20th April 2020.

Thereafter I sought the readings of this 2008 event in its BBC formulation from 28 individuals in varied fields whose opinions I value. Chandre Dharmawardena and Rajiva Wijesinha immediately indicated commitments elsewhere.[4] But I have received two lengthy memoranda from John Richardson in USA and Gerald Peiris in Kandy which I will present soon as individual essays. In this ‘satchel’ I place the contrasting responses from Tony Donaldson,[5] Rajeewa Jayaweera and Lakshman F. B. Gunasekara.[6]

In the 1990s, I lived in Sri Lanka for several years at a time when the Civil War was raging. At the time, there was widespread fear among the lives of ordinary people, largely due to the violence caused by the LTTE. In 1997, while undertaking doctoral fieldwork in Kandy, I was there when the LTTE attacked the Temple of the Tooth and witnessed its impacts, from the senseless killing of innocent Sinhalese people coming to worship in the early morning service, to major damage of the Maligawa.  This was an evil act in which the LTTE set out not only to kill people but also sought to destroy one of the most important Buddhist shrines in the world. The experience that day changed my view of the LTTE and of Westerners who talk about human rights.

Experience matters.  But I don’t feel it in the narratives of those mainly White people representing Western human rights organizations who too often fail to see the big picture. They never mention such things. They come to a country and selectively look for the things that suit their own agendas.

Over the years, there have been attempts by previous governments to give greater autonomy to Tamils but these failed either because the LTTE rejected such proposals, or the government of the day couldn’t get it through parliament. Those opportunities have now gone. Things are different today and the government today is left to pick things up.

Over the years, I have become sceptical of mainly Western human rights organizations in Asia who too often adopt a sanctimonious stance as if their view is superior. They come to a country like Sri Lanka and selectively search for the things they want to see that suit their aims and agendas, but their eyes remain closed to many other things that are also important. There is also the issue of status and power. In writing such a book, Stephen Champion, like many others, are seeking to acquire status and power with almost no accountability and transparency, to become a representative spokesperson for Sri Lanka, thus taking status, power and the narrative away from Sri Lankans. It would be better for such people from Britain to focus on their own problems and human rights abuses. Neo-liberal governments use the platform of human rights to interfere into the internal affairs of other countries, but such governments rarely practice what they preach.

During my visits to Sri Lanka in recent years, I see things there in a more balanced way. I see many good things. The situation has vastly improved since the 1990s: for instance, there is a greater sense of freedom that didn’t exist during the war years. It was the LTTE that did much to undermine our basic human need for freedom.

“I say this. Put that gun down. That is the reality in every conflict of the world. You don’t resolve any war situation until and unless you put the gun down,” says Stephen Champion,

That is exactly what the JR Jayawardena government did after signing the Indo-Sri Lanka Accord on 27 July 1987. The military was confined to barracks. However, the LTTE refusedto put down to surrender their arms the Indians.

President Chandrika Bandaranaike Kumaratunga’s draft political proposals offered the deletion of Article 2 abolishing the Unitary State in favor of a Union of Regions and Article 76 wherein will abdicate major legislative powers, plus executive and judicial powers and the merger of the Northern and Eastern Provinces. LTTE Supremo Prabhakaran would have been the undisputed ‘king’ of the Northern and Eastern provinces for at least 10 years.

Prabhakaran eventually rejected both initiatives while utilizing the lull during negotiations to fortify and rearm.

Mr Champion, out of ignorance or political bias, has ignored such instances when he claimed [then in 2008] “The world is all about change. Well educated people in Sri Lanka deserve better.They should force the government to put the guns down forcing the LTTE to follow suit.”

It is the sacred duty of any elected government the world over to stamp out any group taking up arms instead of negotiating their grievances.  The Sri Lankan government did exactly that on 18 May 2009.

I never actually focused on Champion’s pictorial book partly because when it came out, it was already a little after the counter-insurgency bloodbath presided over by the JR-Premadasa regime. I lived through every agonising minute of it both north, south, east and west. I had people disappearing and dying and being tortured and detained all around me. Too many Iknew and was working with. To date, I think myself lucky to have escaped unscathed exceptthe mental trauma. And I was much involved, as a younger more junior activist in the thickof the human/ethnic rights campaigning both locally and overseas.

[Moreover] our initial campaigning did not have much effect overseas and too many things happened (too many losses) before Western attention began to be paid to the dirty war, the constitutional  manipulations and the political repression. So, we were very frustrated.

SO, I was actually resentful and derisive about Champion (and others) and, as a media person at that time estranged from the mainstream media, I think I felt envious that they could sit safely inthe West and then safely visit and get away and then publish. We could not dare do thosethings and did so only anonymously and surreptitiously because we wanted to continue tolive here and do our activism.

Also, when I did later glance through his book, it was too painful to see those visuals. There is no doubt, Champion has captured the agony (like Dharmasiri Bandaranayaka, S.H. Sarath, and many locals in different ways). That is why, when I did get out my silly, naïve, envy and scorn (unspoken) and look at the book, I could not go through it in detail. [It is] searingly painful and reviving too many memories of lost friends, comrades, failures to prevent violations, injustices etc.

Today, I hope Champion does many more books, especially where it is most needed – like Palestine. AND Prins Gunasekara (that is how is name is spelled) is a hero to me and his book on the repression is a most VALUABLE history of that period that MUST be revived and circulated. That is far more valuable because it has far greater credibility because Champion can always be told to go write/publish about what his own country is doing in propping up and doing business with Saudi Arabia, Israel, etc.

Prins Gunasekara had to flee the country in old age already after much legal activism here defending victims of the repression at the risk of his life. He is writing about and has long borne witness to what happened in his own country.

The period he wrote about is exactly how it happened. As my emotions show.

Ratnayake, Prasanna 2008: “We do not know what no one can deny: Stephen Champion’s Lanka War Stories,” 25 November 2008, https://groundviews.org/2008/11/25/we-do-not-know-what-no-one-can-deny-stephen-champions-lanka-war-stories/

From the Back Cover ….

…… Through over a hundred colour and black-and-white photographs, taken over a six year period, Stephen Champion takes us sensitively through life in Sri Lanka. Ranging from quiet village gardens to the devastation of the war, showing us both the prayers of the shaman and the pomp of the urban rulers, this book provides a broad view of Sri Lanka. As a foreigner he was in the ironic position of being able to move more freely than most Sri Lankans, and unlike other photographers, he took the opportunity, and the risks, to explore the country in depth. The result is a fascinating portrait of a country little understood in the West, sadly torn apart by war, and yet still welcoming and hospitable to travellers.

STEPHEN CHAMPION was born in Worcester, England in 1959. He studied at the Bournemouth and Poole College of Art and gained his Master of Fine Arts degree at the San Francisco Art Institute in 1985. After teaching in San Francisco, he returned to London, and in 1986, travelled to Sri Lanka, where he has photographed extensively. The resulting exhibition has been shown in London and Warsaw, and also toured throughout Sri Lanka. He visits Sri Lanka regularly, and currently lives and works in London.

[1] While I have a copy of the pamphlet where DBS Jeyaraj’s interviews with KP Pathmanathan are spelt out (Jeyaraj 2011), I had somehow missed the subsequent article presented by Jeyaraj in 2012(?) where more information is available. Spliced with data from Mark Salter’s book, this data displays an astonishing programme mounted from February 2009  by Norway and USA to intervene forcibly and rescue the LTTE leaders — in effect fitting into the LTTE strategy of deploying its trapped people as the justification for such an effort.

[5] Tony Donaldson is a Kiwi residing in Australia and has done research work on the Dalada Maligava as well as well as the career of Sunil Shantha and some Sri Lankan painters. He qualified his comments by stressing that he knew nothing about Champion’s background and history. When I remarked that his comments on the Champion event in London benefited from the experience of the attack on the Dalada and added this note: “I wonder how many HR and other Westerners think about the impact of 9/11, or even that of events like the 21/4 Easter attacks, when they reflect on the Eelam struggle,” Donaldson responded thus:

“Good point. After the Bali bombings, the Australian government did much to immortalise that tragedy in our nation’s history by having memorial services the following year or two. Balinese also joined in these events to support Australia.

By contrast, after the white Australian supremist attack on Muslims in Christchurch New Zealand, the Australian government kept away from it. The Aussie media hate mentioning it and in the weeks after the terrorist attack, many here thought the attacker was a New Zealander. Australians will be big on the Bali bombings, but extremely quiet on terrorism in NZ from one of their own.

[6] Gunasekara is a radical intellectual and a senior journalist in Sri Lanka. Rajeeva Jayaweera is the son of the late Stanley Jayaweera (a diplomat) and a regular contributor of feature articles to The Island.