“There should be a huge program to make them (bhikkus) aware of what a modern state is. This has to be a secular state and politicians – not monks – should make the decisions. We have not fully developed the idea or understanding of the modern state. Religion should not be a factor… Buddhism is myself, and how I treat you…” – Ven. Galkande Dhammananda Thera, 18 July 2006. 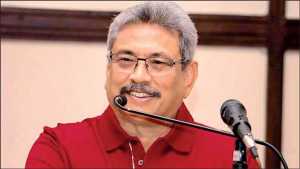 President Gotabaya Rajapaksa (PGR) appears to have found a magic solution to the national question of ethnic division and religious turbulence in Sri Lanka, a solution that somehow seems to have escaped the minds of previous political leaders and social scientists. He consistently maintained that the majority is against devolution of power to north and east.

On that basis, he has put forward a solution to the national question that has two parts: political exclusion and economic inclusion. The underlying assumption of this solution seems to be that, as the Tamil and Muslim minorities enjoy full employment and higher standard of living, they, and especially the Tamils, would be prepared to stop agitating for power sharing with the majority.

The power to rule this country, according to the President, is the exclusive domain of this majority, which is also claiming ownership of Sri Lanka. How can the owners therefore, logically share that ownership with minorities, who, according to owners, are mere tenants?

The President, having been voted into office by Buddhist supremacists, is not in a position or does not want to free himself from their grips and look at the historic contribution pluralism has made to the development of this country over centuries, the democratic structure that has been built since independence to preserve that pluralism, the inner contradiction in his magical solution, and above all the possible reaction from the world at large.

The first issue is to unpack the bundle called majority.  This is not the impermanent political majority, which may change after every democratic election, but the permanent Sinhalese ethnic majority, and within that, the Sinhalese Buddhist majority. Even then, it does not include the entire community of Sinhalese Buddhists, but only those who went behind the supremacists led by sections of the Sangha, and voted for PGR at the last election.

Within that 52% of votes he received, were tens of thousands of Sinhalese Christians against whom Buddhist supremacists have a long history of intolerance and animosity. (That may erupt again once the supremacists finish with the Tamils and Muslims). There was also a small contingent of voters from the minority communities who voted for PGR.

To enforce his political exclusion, strengthening domestic security becomes a primary necessity. He also wants a government with a two-third majority in Parliament to change the constitution in such a manner to reflect “citizens’ wishes”. Who are these citizens? Obviously, that minority, which claims to be the majority.

Regarding security, the April Easter infamy, about which a full and independent inquiry is yet to take place, has licensed the President to take any step necessary, including re-militarization of the country if the situation warranted.

Sixty-three promotions in the army – one of the largest in recent times, the appointment of military personnel to civilian positions, and transfers and demotions of the unreliable – are obviously measures to keep the armed forces happy and on the side of the President. The media has already been warned not to spread “lies”, which in other words means not to contradict what the regime says and not to criticise what it does.

Exclusionary politics requires all this as precautionary measures to keep opposition in check, and that exclusion can effectively be extended to any group or party that dares to challenge the regime. Sri Lanka’s democracy is clearly under stress.

Economic inclusion, the other half of the magic formula is a conciliatory gesture to grumbling minorities and to tell them that the so called majority would not object to allow Tamils and Muslims become partners in and beneficiaries of state sponsored programs of economic development. It is particularly addressed to the Tamil community. Even so, given the recent experience of adverse reaction by the supremacists towards the economic achievements of minorities, it is doubtful whether they would endorse a policy of unrestricted inclusion.

One of the reasons for BBS inspired violence against Muslims in recent years was commercial envy. The supremacists could not tolerate a few retail Muslim establishments doing extremely well. They also did not want to see Muslim petty traders retailing their goods in Sinhalese areas. A number of Muslim commercial establishments were attacked, looted and burnt, and some bhikkus joined BBS members to lead a campaign urging Sinhalese customers to boycott Muslim businesses. Given this sad experience one is not sure whether the so-called majority would welcome the President’s strategy of economic inclusiveness without setting limitations.

Thus, while the first half of the solution will not be acceptable to the minorities, and particularly to the Tamil community, the second half will earn the wrath of supremacists. If the President wants to go ahead with his program come what may, he may have to rely heavily on his security department.  The country may turn into a Police state. That may have international repercussions. When that happens, the PGR would not be able to defend his strategy with the sovereignty argument. The concept of sovereignty is not absolute in modern times.

Even if economic inclusion allows minorities to prosper, it does not mean that minorities, and especially the Tamil minority, would like to remain politically excluded. It is economic prosperity that enables people everywhere to rise up and demand participation in governance. Iranians under the Shah, Iraqis under Saddam, Libyans under Gaddafi and today’ citizens of Hong Kong are examples to prove this point.

It is therefore better for the long term stability and prosperity of this nation if PGR revises his discriminatory political strategy and makes it inclusive. Democracy may have its defects but is there a better model than that?

Ameer Ali  is attached to the School of Business and Governance, Murdoch University, Western Australia.