An Indonesian evaluates the R2P Interventions

Agung Wasono: “The Responsibility to Protect and State Sovereignty,”  http://www.agungwasono.com/2016/06/the-responsibility-to-protect-r2p-and.html# 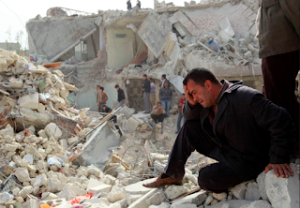 Crisis in Syria – Implementation of R2P

Introduction: This article discusses the criticism to the Responsibility to Protect (R2P) and more specifically on the debate of its relationship to State sovereignty. This article is divided into four main parts: the first part discusses the background of R2P including its pillars and principles, the second part discusses the different understanding of sovereignty in the context of national and international relations, the third part explores the debates on R2P and sovereignty, and last but not least is the conclusion. Overall, I found that criticisms to R2P are mostly addressed to its imperfect implementation instead of its principles. I argue that the difference concepts of State sovereignty should not be contested each other. In addition, R2P should also be understood in a comprehensive approach by considering all pillars and principles.

The Responsibility to Protect (R2P) according to the 2005 UN World Summits, is the responsibility of the international community to protect populations from genocide, war crimes, ethnic cleansing and crimes against humanity (UN 2005: 30). There are three pillars of R2P as the guide for the implementation which agreed by the General Assembly meeting in January 2009, are: State responsibility to protect their populations, the responsibility of international community to assist states in fulfilling this responsibility, and the responsibility of international community to use diplomatic, humanitarian, and other means to protect populations from these crimes (UN 2009: 10-22). These pillars are nonsequential and are equally weighted (Bellamy 2010: 143). Moreover, in specific case in which military intervention need to be implemented, there are six principles that must be satisfied, i.e: (1) just cause or there must be an extraordinary level of human rights violations, (2) right intention to stop human suffering, (3) proportional means, (4) last resort after all non-military options have been considered, (5) reasonable prospects or likelihood to success, and (6) right authority from the UN Security Council (Hamilton 2006: 290-291).

R2P and State Sovereignty: the dilemma of intervention

The conservative meaning of State sovereignty is related to States’ power over their territories, governance, law, and citizens. Walker (1988, as cited by Thomson 1995: 213) explores that the debate among realist and liberal independence about the concept of sovereignty has rescued the concept from something abstract onto something practical. State sovereignty, for liberal independence theorists, is defined as State’s power to control activities and populations within their territory, whereas for realists, the very meaning of sovereignty is the State’s ability to make authoritative decisions and it necessarily entails nonintervention as a logical precondition for the existence of a multiple State system (Thomson 1995:213; Glanville 2014: 13).

Since its adoption in 2005, R2P doctrine has become part of the diplomatic tools of humanitarian works used by international organisations, governments, independent commissions, and NGOs to justify behavior and demand international action (Bellamy 2010: 144). Since then, there have been many examples of the implementation of R2P. There are at least ten situations in which R2P has been invoked by UN, State, or coalition of states (Bellamy 2010: 149-150; Williams and Bellamy 2012: 273). However, intervention in Libya in 2011 was the first and the only military force operation authorized by UN Security Council through UN Resolution no. 1973 (Williams and Bellamy 2012: 273).

Despite its implementation in many countries since more than ten years ago, R2P and its implementation have been criticized by some countries, scholars, and individuals. The international debates about the role of R2P in preventing genocide and mass atrocities cannot be separated from its relation to State sovereignty. Williams and Bellamy (2012: 283) argue that the debate on the relationship between R2P and State sovereignty usually around the legality and morality of using military intervention and more specifically in the absence of UN Security Council authorization. Welsh (2009: 2-3) states that enshrining the practice of intervening other States’ internal affairs as a right in international law was strongly opposed but then during the latter part of 20th century in which international human rights instruments emerged and vulnerability of civilians increased, the discussion shifted to a more permissive context.

Advocates of R2P contend that R2P is the best option available which enables the international community to intervene in a State when they failed to protect their population from genocide and mass atrocities. Gareth Evans – one of the originators of R2P – argues that R2P is critically important to be implemented to prevent states use their sovereignty as “a license to kill” (Evans 2009: 16). Sovereignty, therefore, should be understood as “sovereignty to protect” (Deng 2010; Evans 2008: 36-37). In addition, Caballero-Anthony (2012: 130) contends that R2P is critically important to be operationalized as a comprehensive and multi-level approach (from international to grassroots level) to protect civilians despite continuing skepticism from several countries about pillar three’s implications.

Responding to criticism that R2P breaks State sovereignty, Power (2009: xi) states that instead of trampling their sovereignty, R2P was crafted precisely to protect developing countries from outside interventions by giving national governments the right of first response. Glaville (2014: 217) argues that conventional account of sovereignty is no longer applicable in international relations because it neglects the relationship between sovereignty and responsibility. In addition, Reinold (2013: 8) points out that sovereignty is not an intrinsic value, it ought to be conditional and not absolute.

Bellamy (2015: 82-90) gives several positive reasons why R2P constitutes the most promising way to protect vulnerable populations: First, it commands a global consensus: R2P can move onto a consensus, and consensus comes legitimacy to create social pressures needed to push governments to comply with internationally agreed standards. Second, as R2P grounded in responsible sovereignty, it can engage States to achieve its goals. Third, R2P provides a clear framework for action which offers a useful guide to prevent and respond mass atrocities both a diplomatic tool and a useful guide to action. Fourth, R2P helps make mass atrocity prevention a living reality when UN member states recognized and approved its pillars and principles by establishing Office of Genocide Prevention and R2P within the UN. Fifth, R2P challenges the ideologies that give rise to genocide and mass atrocities, and sixth, R2P calls for a comprehensive partnership for all people and institutions to mobilise their resources to address the problem of mass atrocities.

Moreover, a public opinion study in Arica (covering Ghana, Kenya, Nigeria, Tanzania, Zimbabwe, Cameroon, and South Africa) in 2005 concluded that 65 percent of the Africans agreed that UN Security Council has the right to authorize the use of military interventions to prevent genocide and mass atrocities (Chalk et al 2012: 41).

On the other hand, critics to R2P rest on several contentions such as: R2P violates State sovereignty, unclear legal status in world politics, the use of military intervention and the creation of war, double standards in its implementation, and abuse of R2P for other State’s hidden agenda. Moran (2011) states that the new concept of sovereignty as “responsibility” – instead of “rights” or “control” – was introduced to please the United States (US) and its allies to intervene other states’ internal affairs. By changing the meaning of sovereignty from power and control to responsibility, R2P also weakens State sovereignty.

Loewenstein (2014) gives an example on how R2P has been misused by Western countries when the UN-authorized military intervention to Libya succeeded to kill Muammar Gaddafi and change the regime but current events in which Libya is now divided by civil war and violence is widespread. The intervention has failed and left the country in a worse situation. Moreover, Fahim (2014) reports that after the military intervention, the US and its allies failed to help Libyans achieve either security or democracy. Libyans have left to uncertain future and endless fights. There are also critics that R2P has double standards in its implementation. If the aim of R2P is to prevent genocide and mass atrocities, we never hear the idea from R2P backers implement R2P in Gaza to protect Palestinians from Israeli missiles (Loewenstein 2014).

There are also criticisms when it comes to the UN, Holmes (2014) states that one of the weaknesses of R2P is inaccurate understanding of the role of the UN which is based on the principle of equal sovereignty of all its members. Moreover, Hamilton (2006: 296-297) argues that “in principle” R2P has no problem and supported by a range of international stakeholders, but it has three challenges in the implementation: a lack of political will, a lack of authorization, and a lack of operational capacity. These three challenges become the decisive factors to determine whether some interventions will be succeeded.

When it comes into military force, Williams and Bellamy (2012) argue that R2P has three main challenges: First, principled disagreement on legal and moral reasons for using military intervention. This disagreement framed around the issue of sovereignty, territorial integrity and political independence. Second, political objections: the objections framed in the political priorities of State’s duties to take care of their internal matters rather than “saving strangers” and also the objection on the use of State’s financial resources. Third, prudential consideration: this objection is mostly related to the assumption that military intervention is likely to create more harm than good.

Looking at different perspectives on R2P above, it can be seen that most of the criticism is addressed to its implementation and not to its pillars and principles. Advocates and opponents of R2P agree that genocide and mass atrocities should be prevented and people everywhere should be protected from those crimes. The critics are also targeted specifically to the third pillar of R2P which gives an opportunity for international community to intervene State sovereignty without national government’s consent.

In my opinion, R2P should be understood comprehensively and the discussion of it should beyond the use of military force. Military force is the last option only if all non-military options have been considered. R2P was criticised due to its imperfect application in decision making, problems occurred during its execution and post operation by using military force. As a result of the imperfect application, R2P is also being blamed for breaching State sovereignty. Sovereignty as “power” and “control” and sovereignty as “responsibility” should not be contested each other in the context of R2P. All pillars of R2P are addressed to strengthen State sovereignty by giving international assistance if the serious problem occurred.

As a concept which ranges from national responsibility and international community assistance to the use of military force, R2P should be understood in a comprehensive approach. There are view criticisms addressed to the pillar and principles of R2P. Criticism appears as a response to narrow understanding and applications of R2P which focus on the use of military force as it breaches State sovereignty. The narrow application will lead to the misuse of the concept and create uncertainty in the future. The next step that should be considered is to have an agreement on how to apply the pillars and principles in a very complex crisis including the possibility to reform the structure and governance within the UN Security Council to engage UN member states in a more inclusive way

Caballero-Anthony, M. (2012), “The Responsibility to Protect in Southeast Asia: opening up spaces for advancing human security” The Pacific Review 25(1): 113-134.

Evans, G (2008), The Responsibility to Protect: Ending Mass Atrocity Crimes Once and For All, Washington DC: The Brookings Institution.

Glanville, L. (2014), Sovereignty and Responsibility to Protect: A New History, Chicago: The University of Chicago Press.

Hamilton, R, J. (2006), The Responsibility to Protect: from document to doctrine – but what of implementation?, Harvard Human Right Journals, Vol. 19, pp 289-297, available at: http://heinonline.org/HOL/Page?public=false&handle=hein.journals/hhrj19&collection=journals&id=293 (accessed 20 May 2016).

Holmes, J. (2013), Does the UN’s responsibility to Protect necessitate an intervention in Syria?, The Guardian, edition 19 August 2013, available at:   http://www.theguardian.com/commentisfree/2013/aug/28/syria-intervention-un-responsibility-to-protect (accessed 19 May 2016).

Loewenstein, A. (2014), “Western liberations are grotesque experiments – just look at Libya,” The Guardian, edition 31 July 2014, available at: http://www.theguardian.com/commentisfree/2014/jul/31/western-liberations-are-grotesque-experiments-just-look-at-libya  (accessed 19 May 2016).

Reinold, T. (2013), Sovereignty and the Responsibility to Protect: The Power of Norms and the norms of the powerful, New York: Routledge.

United Nations (UN) (2005), Resolution adopted by the General Assembly, available at: http://www.un.org/en/preventgenocide/adviser/pdf/World%20Summit%20Outcome%20Document.pdf(accessed 16 May 2016).

United Nations (UN) (no year), The Responsibility to Protect, available at: http://www.un.org/en/preventgenocide/adviser/responsibility.shtml (accessed 15 May 2016).