The Rajapaksas as Pillars of Populism and Authoritarianism

Kanishka Jayasuriya, in East Asia Forum, 27 November 2019, where the title reads “The Sri Lankan election and authoritarian populism” … with highlights initiated by The Editor, Thuppahi

The election on 16 November 2019 of Sri Lankan President Gotabaya Rajapaksa — the brother of former president Mahinda Rajapaksa — ushers in an authoritarian populist regime that upholds a form of ethno-religious nationalism. The foundation of such a regime is in the new bourgeoisie that has emerged over the last two decades. 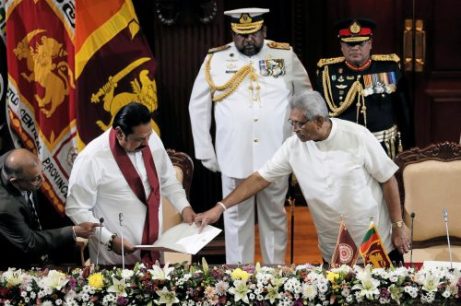 Gotabaya was secretary of the Ministry of Defence and Urban Development under the Mahinda Rajapaksa government (2005-2015). He presided over the brutal end of the civil war in 2009 that has been the subject of much international inquiry. He oversaw security agencies that were accused of human rights abuses, including extrajudicial killings and torture. It appears that Gotabaya’s election victory will strengthen the power of this security apparatus and the extensive use of ‘exceptional powers’ within the constitution.

But what gave rise to his victory?

The 2015 election of then president Maithripala Sirisena in coalition with the United National Party (UNP) was touted as ushering in an era of democratic renewal. Instead, it was mired in a contest between then prime minister Ranil Wickremasinghe and Sirisena, whose lack of political skill was matched by his political opportunism. Nonetheless, the coalition did make some legal changes, including limiting presidential power and opening up — albeit limited — democratic political space.

But Wickremasinghe was not capable of building a sustainable political coalition within the new political terrain that had emerged over the last two decades. While personalities and the day-to-day political dramas were important, these were secondary to the reality that there was increasing resistance within the state apparatus that includes security institutions where ethno-nationalism has a strong ideological resonance.

There are two intersecting structural forces at play here. The first is a growing militarisation of the state apparatus and the second is the expansion of exceptional powers within wider civil society.

Since the 1970s Sri Lanka has faced two insurgencies: one in the south in the 1980s and the other a more protracted civil war against the Liberation Tigers of Tamil Eelam (LTTE) in the north that ended in 2009. These two insurgencies profoundly shaped state institutions — particularly regarding the adoption of exceptional or emergency powers that permitted the governing authorities to bypass normal constitutional process — effectively creating parallel state institutions.

The exceptional powers that give the military and police extensive authority have become normalised. These exceptional powers have been used to manage and contain political activity in the north of the country, but they have had wider repercussions for the country as they create formal and informal networks of power.

This has led to the growing power and influence of the repressive state apparatus — the military and the police — and potential criminalisation of political dissent. This is not just an escalation of authoritarianism, but it is likely to result in a more militarised approach to governance. More crucially, the Gotabaya presidency will cement the influence of those far-right ethno-nationalist groups with links to the new party formed by the Rajapaksas, the Sri Lanka People’s Front (Sri Lanka Podujana Peramuna or SLPP), and to the repressive state apparatus. One such group, the Bodu Bala Sena (BBS), is linked to radical right-wing Buddhist monks with state connections. It has been extensively involved in attacks on Muslims in open defiance of legal institutions.

Much like the relationship between the Rashtriya Swayamsevak Sangh and the Bharatiya Janata Party in India, the BSS and other groups act as the stormtroopers of right-wing populist parties like the SLPP in Sri Lanka. These groups are hostile to pluralism and liberal institutions and have become more influential, particularly among sections of the petit bourgeoisie. These organisations will undoubtedly play an important role during Gotabaya’s presidency as they provide a support base within far-right civil society. The use of these groups and organisations as instruments of political governance is a manifestation of the informal networks of power that have emerged within the state.

There has been the emergence of a new assertive bourgeoisie that has benefited from authoritarian politics. This is a bourgeoisie that developed on the back of neoliberal policies implemented by successive Sri Lankan governments since 1977 that was until then a rare example of a third-world welfare state.

It is often forgotten that Sri Lanka was one of the first experiments of the rapid introduction of market reform, with former president JR Jayewardene overseeing the shift from being a third-world welfare state. Over time, these reforms led to the emergence of a bourgeoisie that had diverging interests to the old mercantile groups. This business class was strongly supportive of market-oriented policies and was facilitated and supported by access to state resources and projects, including property development and infrastructure projects such as the Port of Colombo.

Most analysts view these infrastructure projects as driven by strategic interests and often overlook that these projects bring benefits to the bourgeoisie that the Rajapaksas and politicians in all major parties are linked to. There is a myopic focus by political analysts on the strategic competition between China and the United States that ignores how these conflicts are shaped and used by domestic social forces. The key point here is that strategic conflict needs to be understood in the context of the emergence of the new bourgeoisie.

There will be ongoing challenges to this regime. The fact that its majority is largely confined to the Sri Lankan Buddhist hinterland, and with the pressures of household and public debt growing and income and asset inequality widening, will intensify social conflict that will challenge this regime.