Challenging Hannah Beech: The Strangulation of the Rohingyas, 1948-2019

The section of the Bangladesh frontier in the south-east runs adjacent to the northern Arakan states of Myanmar (formerly, Burma) —a politically turbulent area which has, at least from the late 1940s, been featured by spells of high intensity conflict between the government of Myanmar and the Arakanese Muslims, the ‘Rohingya.’ The length of time over which the Rohingya have coexisted in this hilly area with the numerically larger ‘Rakhine’ — a predominantly Buddhist ethnic group— is not known with certainty. The Rohingya claim in this regard is that their roots could be traced back to the 10th century Muslim migrations into Burma, and that, in the northern Arakan, they constituted an independent principality for more than three centuries from 1430 to 1784.[i]  This has been disputed.  The official stand of the government of Myanmar (which has, in fact, been corroborated in certain scholarly writings) is that the Rohingya community consists largely of Bengali Muslims who migrated into this area after the annexation of Arakan by the British in 1843. 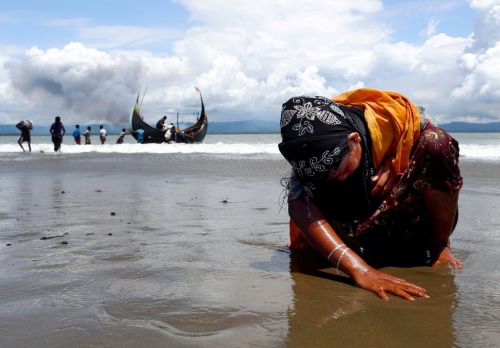 Regardless of the validity of one or the other of the foregoing assertions, there is hardly any doubt that, under British rule, the Rohingya links with Islamic Bengal remained more tangible than their links with the core areas of Buddhist Burma in the Irrawaddy valley.  For instance, in the period leading to the withdrawal of the British from South Asia, there was a demand for an independent political entity for the Arakanese Muslims.  During this time, the leaders of this community also probed the possibility of incorporation with Pakistan to which the Muslim League gave nominal support.[ii] In the wake of Myanmar’s independence, the demand for an autonomous Muslim state in the Arakan took the form of an insurrection led by the Mujahiden—a rebel group committed to a ‘holy war’— which was brought under a measure of control by the Myanmar government only in 1955.  It has been claimed[iii] that atrocities committed by the Mujahiden on the Arakanese Buddhists during this time resulted in a large-scale exodus of the latter group, and that the land thus left vacant attracted a considerable number of new Muslim migrants into this area from the adjacent parts of East Pakistan.

The suppression of the Mujahiden insurrection did not result in the complete elimination of Muslim militancy in northern Arakan.  The so-called ‘Rohingya Patriotic Front’ —an umbrella organisation for small Muslim guerrilla groups that had at least nominal links with similar militant groups among other ethnic minorities in the peripheral areas of Myanmar— persisted with a ‘resistance movement’ against alleged discrimination and harassment by the government.[iv]  The situation deteriorated further after the overthrow of civilian rule in Myanmar in 1962.  The emphasis placed by the new military regime on national integration meant that the restrictions placed upon the minority communities of the country became more stringent, and the strategies pursued in the maintenance of law and order more oppressive.

A critical stage in the escalating conflict in northern Arakan was reached in 1978 when the Ne Win government launched the so-called “Nagomin Programme” which has been variously described as “a census operation,”[v] “a campaign against illegal immigrants,”[vi] and “an attempt at national consolidation through forced eviction of the Muslims from Myanmar.”[vii]  The writings available on this campaign suggest that it had all these elements, and that, as it gathered momentum, the Muslims living in northern Arakan were made the victims of extreme forms of hardship, brutality and terror. If, indeed, driving out the Muslims was one of its aims, the campaign achieved a high degree of success as evidenced by the fact that, by May 1978, an estimated 200,000 Rohingya had fled across the border to Bangladesh.[viii]

The Dhaka government, though reluctantly accommodating the refugees in camps located in proximity to the Myanmar border, categorically refuted the notion that the refugees were illegal immigrants from Bangladesh evicted from Myanmar.  The magnitude of the crisis attracted the attention of international organisations such as the United Nations Commission for Refugees and other human rights NGOs which, while engaging in relief operations (the scope of which remained subject to stringent restrictions imposed by the governments of both Bangladesh and Myanmar), insisted on the principle that there should be no forced repatriation of political refugees across international frontiers. The Myanmar government, on the one hand, failed to restore conditions in the Arakan area which could facilitate the voluntary return of the refugees. It denied the Bangladeshi figures relating to refugee numbers. In official communiqués, it referred to the refugees as “armed bandits from Bengal,” “rampaging Bengali mobs,” and “wild Muslim extremists.”[ix] It also charged that the refugee camps located adjacent to the frontier were been used as guerrilla bases. On the other hand, the Bangladesh government, overburdened with its own problems, is also reported to have employed various coercive methods such as intimidation and physical harassment, and frugal rationing of food and other essentials, for inducing the refugees to return to Myanmar. There is lack of clarity on the eventual outcome of these counteracting attempts. According to certain observers,[x] by the early 1980s, the large majority of refugees had returned to Myanmar. Others[xi] have maintained that large numbers of Rohingya have continued to linger in refugee camps.

The conditions which those among the refugees who returned to Myanmar encountered were only marginally better than they were before the “Nagomin Programme,” the improvement being largely confined to the reduced military presence in northern Arakan. This area, however, continued to suffer neglect and, as reported by several UN agencies,[xii] living conditions in the predominantly Rohingya districts, as reflected in basic demographic and welfare indicators, were the worst in the country. The persistence of ethnic tension in the area was also evidenced by outbursts of Muslim-Buddhist clashes.[xiii]

In 1990, the Arakanese Muslims became the target of a second wave of military oppression which, according to Lintner, was a “diversionary tactic” of the Myanmar government taken in the face of mounting popular pressures towards democratisation.  The offensive was justified by the authorities with reference to an alleged resurgence of insurrectionary activities of the “Muslim extremists” in the north Arakan area.  Its outcome was another large-scale out-flow of refugees to Bangladesh which, by March 1992, is reported to have aggregated to an estimated 270,000.[xiv] The government denied the alleged scale of the exodus, insisting that no more than a few thousands had fled the country, and also charged that the Bangladeshi government was providing covert support to armed insurgent groups especially by way of permitting both guerrilla attacks on Myanmar from Bangladeshi territory as well as recruitment of youth to guerrilla cadres in the refugee camps.

The intense hostility between Bangladesh and Myanmar featured by sabre-rattling from both sides of the frontier which prevailed during this period began to ease only in 1994 when bilateral negotiations lead to a phased-out return of the refugees to Myanmar, paralleled by measures adopted by the Dhaka government to curb the Rohingya rebel operations in the border areas of Bangladesh.  Though an estimated 190,000 refugees are said to have returned to northern Arakan by the end of 1995, more recent reports indicate that the Bangladesh-Myanmar border zone has continued to remain an arena of tension and unrest.[xv]

While blatant discrimination especially in the provision of ‘basic needs’, and sporadic sledgehammer military responses to even localized conflagrations perpetrated by Rohingya militants, are said to have been initiated by the Myanmar government in 2012. According to reports compiled by both UN agencies  as well as INGO-sponsored groups engaged in relief operations, these operations resulted in large-scale massacre of thousands of civilians, a cross-border  exodus of  many thousands of refugees (several reports placed the number at about 200,000, and about 150,000 being herded into refugee camps located close to several towns in southern Mynamar.

Despite the claimed trend towards ‘democratisation’ of the Myanmar polity from about the early years of the 21st century, several critics have referred to an intensification of the various forms of persecution of Rohingya people, especially evident since about 2012. According to recent claims by the Bangladesh government, the number of Rohingya residing in refugee camps has risen to about 800,000. Note also that the Rohingya, officially classified as “stateless”, are granted citizenship in Myanmar only on submission of evidence of their ancestors had entered and were living in Burma before 1948. 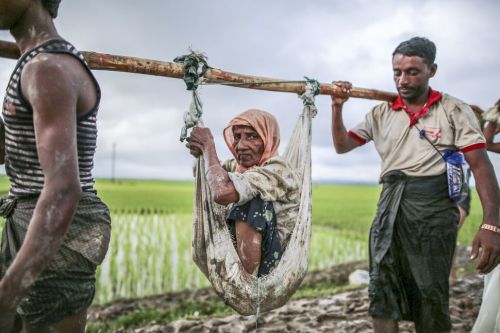 A NOTE from GERALD PEIRIS:

I have prepared on the Rohingya so that those who could claim to have even a modicum of familiarity with the socioeconomic and political conditions here in Sri Lanka might realise how absurd it is to draw parallels between Sri Lanka and Myanmar in respect of Buddhist-Muslim relations. The first part of the ‘Note’ is an extract from a long article I wrote for the Ethnic Studies Report (Vol XVI (1): 1-72. I have updated that analysis with my readings on this topic after my erstwhile friend John Holt published his absurd presentation at an ICES conference in 2014.  The ‘Note’ is still in very rough form…. Within the first year of the paper being carried by ‘Researchgate’ (i.e. 2014) it had more than 4,000 ‘hits’ – the majority from Bangladesh, but also from several other countries including US and Australia, and some very rewarding responses.

Note: There are many writings on the current state of the Rohingya published in the Internet. Two such sources are referred to below……  Source:  http://www.bbc.com/news/world/asia

This is a Burmese transcription and English translation of a sermon given by Sitagu Sayadaw, a revered Burmese Buddhist teacher, on 30 October 2017.

It has received a lot of attention due to its use of a notorious section of an ancient Buddhist text, the Mahavamsa. I have written about the context of the sermon in an my essay ‘Sitagu Sayadaw and justifiable evils in Buddhism’.

One response to “Challenging Hannah Beech: The Strangulation of the Rohingyas, 1948-2019”