Children have danced side by side in an emotion-charged display of unity against the appalling acts of hate that claimed the lives of their young classmates in Christchurch. A vigil for the 50 people gunned down in Friday’s terror attack turned to a stirring scene of power and strength as school students channelled their mourning into a haka war dance.

In other parts of the city, meanwhile, families were preparing to wash the bodies of the first victims to be released by authorities. Relatives and community members tenderly perform the washing ceremony as part of traditional Islamic ritual to ready the bodies for burial. 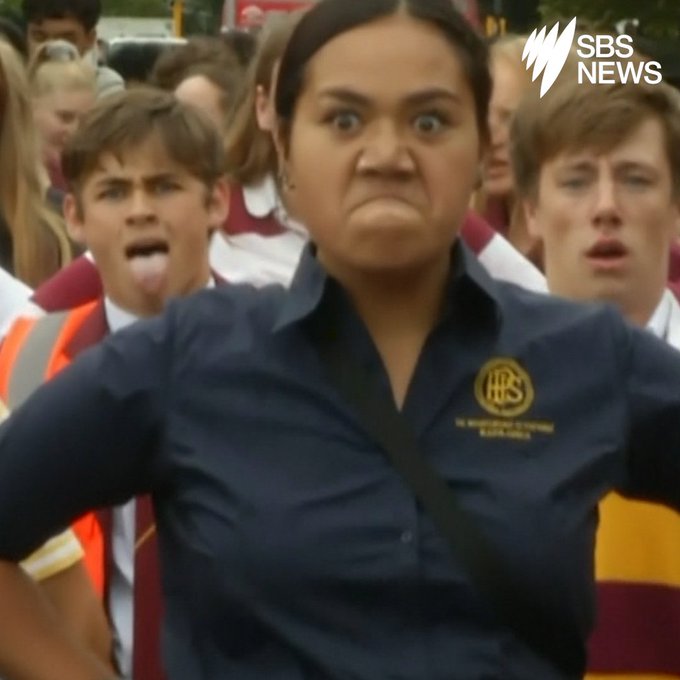 This small group of kids started an impromptu haka in tribute to two of their peers slain in the Christchurch shooting. Soon they were joined by scores of fellow students to form a deafening chorus.

Among those reeling from the attacks were Cashmere High School students whose peers Sayyad Milne and Hamza Mustafa were killed at their local mosque during peaceful prayer time. Sayyad was half way through year 10 at the school, where he was remembered for his kindness.  Hamza was finishing year 12 and had dreams of becoming a veterinarian. Pounding their chests, stamping their feet and chanting, Cashmere students broke out into an impromptu haka on Monday. Dozens of other children quickly joined in to support them, in a passionate display of community at the vigil that attracted thousands of tearful mourners.

The teenagers were also lighting candles and singing in unison as their thoughts turned to the other victims allegedly killed by an Australian white supremacist.

Cashmere principal Mark Wilson described Sayyad as “an awesome kid” who had “kind eyes, a big heart, a cheeky smile, and a thick mop of black hair” and loved playing football and futsal.

Hamza, who had fled Syria with his family, loved horse riding and wanted to be a veterinarian. “He was also working very hard and successfully and he was a compassionate young man. Despite not being here a long time, he had developed many friends,” the principal said.

Mr Wilson confirmed Hamza’s younger brother was in hospital with gunshot wounds. Their father was killed. Former student Tariq Omar, 24, died in the attack and the father of a current student was injured.

The Cashmere school head boy, who organised Monday’s vigil, wrote on Facebook over the weekend that it was truly New Zealand’s “darkest days”. “In times like this, people often look to hatred and anger, but we must look to love and kindness,” he wrote, before quoting Martin Luther King: “Darkness cannot drive out darkness, only light can do that. And hate cannot drive out hate, only love can do that.”

An estimated 11,000 people turned out for a vigil in Wellington on Sunday.

The first of the 50 victims were released to family on Sunday night, with the last to be handed over by Wednesday. The funerals of the victims are expected to begin on Tuesday. There had been pressure on authorities to release the bodies sooner so that they could be buried quickly according to Islamic custom.

Federation of Islamic Associations of New Zealand women’s affairs co-ordinator Rehanna Ali described the process of preparing the bodies for burial. “These people died in prayer, on their way to prayer, on our holy day, a Friday, in the precincts of our holy places. And faith was what they died for. And so faith is now part of the healing process for their loved ones,” Ms Ali said.

“Through all of this we try to remember that what we are bringing back to this tragedy, this horror, is a sense of compassion. The response to so much hate has been love.”