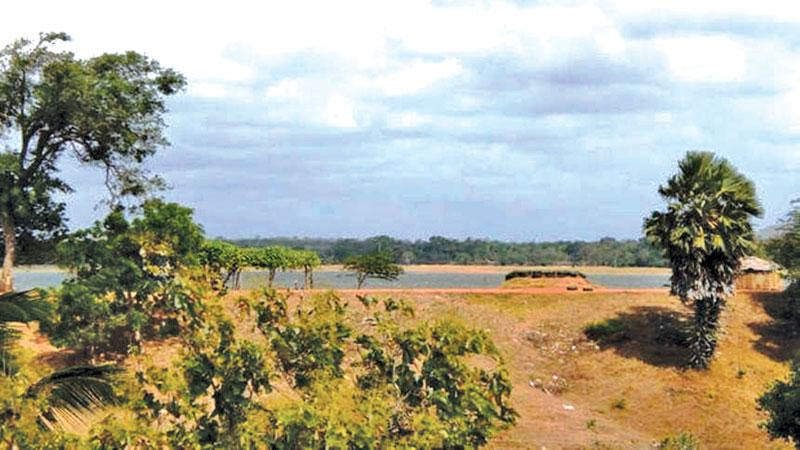 On the road to Sirambiyadi

In every culture family is an important element of human life. For centuries Ceylon had been a maritime domain for foreign traders, defiant conquerors and zealous missionaries. All these foreigners left behind their ancestors, who with time, integrated into our society. There were many nationalities who lived here in those ancient times – Arabs, Europeans, Indians and Africans. Much focus has been given to the various ethnic clans, but, people of African origin domiciled here were marginalised. Once in a while, these African-Sri Lankans would capture our attention via a youtube song video. One of the last such families of direct African origin live in Puttalam. The name Puttalam, is believed to be derived from the Tamil word “upputhalam” – uppu meaning salt and thalam meaning area of production, thus Puttalam is still famous for salt. 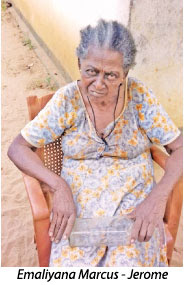 After sharing my discovery with two like minded classmates Ravi and Sathiesh, we set off by jeep on the long drive to Puttalam. Travelling on the expressway up to Negombo we went via the old route – passing through Waikkal, Kochchikade, Chilaw, finally reaching Puttalam, a distance of almost 136 kilometres. At the junction I made inquiries to find the village of Sirambiyadi, the home of this lost tribe. A Muslim elder gives us directions. Puttalam town has a large majority of Muslim citizens, with Tamils and Sinhalese existing in rural bliss.

We head along the main road and after five kilometres, we notice sign boards warning us of elephants crossing! We spot a small stone statue of Blessed Mary – the landmark for our turn off. The jeep now travels on a sand road, bordered by thick foliage. A young man is riding a bike. We stop and ask for directions. ‘Ah, you are searching for our African friends, you’re on the right road.

Please keep going and you will encounter a few houses, they live there’. Within minutes we spot some small houses, in a quiet neighbourhood. The time reads 1.40 pm. The houses are nestled in a patch of garden. There are no fences or gates. This is a real community. A few hens meander about.

Suddenly, like in a scene from a National Geographic show, a tall woman clad in a green skirt and t-shirt walks towards us. The three of us are spell bound- she is very African. She stands and smiles. Within seconds three other African women come out from another house, followed by the barking of an excited dog. Ravi and I deliberated on whether these people spoke Creole or Portuguese on our way here, and were intrigued when the woman in the black and white blouse spoke perfect Sinhalese. She welcomes us, ‘Would you like to sit inside or in the garden? The garden is full of trees and a cool breeze filters in. 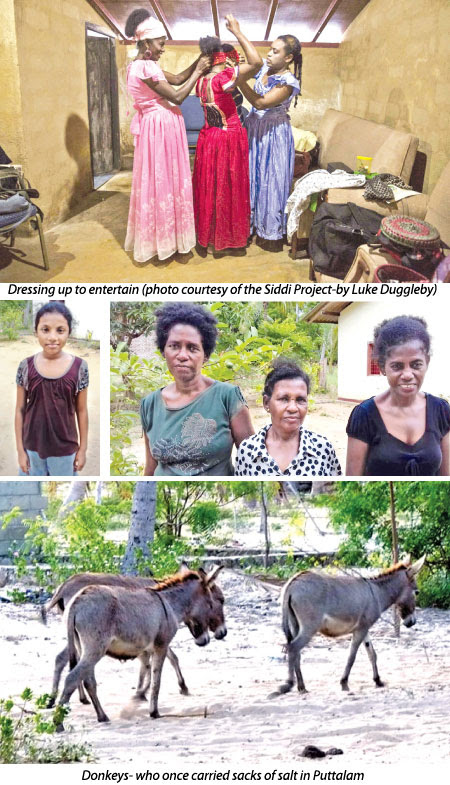 A teenage girl brings three chairs. The oldest of the four women goes on ‘Yes, we are the Africans of old Ceylon. We are children of fifth generation. Our great grandfather was Martin Manuel. My name is Juliet and I am 59 years old. These women here are my three sisters – the one in the red skirt is Jenny Florence, the one in the green skirt is Maria Jacintha and the woman in glasses wearing a pink t-shirt is Sherine Alex”. It was a moment to breathe in and cherish this introduction. Before us were the last four African sisters of Ceylon. They all share a rich dark complexion and naturally curly hair. They have sharp features and radiant eyes.

Jenny Florence continues ” Our ancestors have come here, when this country was under Portuguese rule. We have heard our grandfather say that at one time there were almost 4,000 soldiers and workers of African descent who laboured to build the Colombo Fort.

Of course, the Fort is no more. Our father’s surname was George. We have been living here for decades. We have had some of our tribe living in Batticaloa and Trincomalee, but I have never met them- we have zero contact. Today, we all have Sri Lankan identity cards”.

Jacintha remains silent and smiles. Juliet keeps up the momentum ‘Those days when we used to go to school the other children would direct comments and jokes at us, saying, look at the Africans. We were a bit hurt, but with time we didn’t care. Thankfully, today, when our 7th generation of children go to school, there is no discrimination – we all speak Sinhalese’. By now three children join us, giggling.

The eldest of the three is Chundapa (grandchild of Juliet) and the other two are a boy and girl. They don’t have any African facial features and their hair looks very Sri Lankan.

Juliet points to the teenage girl ‘See Chundapa, her father is a Sinhalese, so she does not carry our kind of name’. The young girl giggles and hides behind a tree. In this remote village there are 22 families of African descent laced with inter- marriage. Their leader is Peter Lewis, a sweep ticket seller.

The clan’s matriarch is 85 year old Emaliyana Marcus- Jerome, the proud mother of the four sisters Juliet, Jenny, Jacintha and Sherine. She approaches, walking cautiously, and I offer her my chair.

The old lady has a pleasant smile, and narrates” I have happy memories growing up here in Puttalam. Those days our men worked in the salterns and some did government jobs. My mother was a good cook.

On festive days like Easter and Christmas she would spend hours roasting a pig, with the help of some women. If we couldn’t get a pig we roasted a few chickens. We enjoyed the meal. Our clan got together around a fire – we sang and danced under the moonlight. Oh! I was a young girl then”. Emaliyana’s eyes light up as she journeys back in time ‘As you know we love our music and dance. We sing old songs in Portuguese. We don’t speak Creole, I can’t remember if my grandparents spoke this dialect. Now we don’t roast pigs anymore. We are well adapted to rice and curry. My grandma used to make an oil cake using flour, sugar and sesame seeds.’

Jacintha and Jenny come with a cloth bag, to reveal four basic instruments- a rabana (small drum), a pair of polished coconut shells, 2 silver spoons and an empty glass bottle. Juliet takes the coconut shells and begins a steady beat, and in seconds Jenny follows with pulsating beats from the drum. We didn’t understand the Portuguese lyrics, but the women sang their hearts out. Jenny is dancing, her slender hips swaying.

The harmony of Juliet, Jenny, Jacintha and Sherine inspired old Emaliyana to join in. This was a golden moment from centuries ago. I was surprised when 12 year old Chundapa began to sing. The women stopped and we applauded. They smile and bow. This humble rendition in the coconut grove is indelibly registered in my mind.

The women explain, ‘We perform as a 12 piece choir/band- 6 men and 6 women. We have sung at the BMICH and sang during CHOGM event. In 2012 we were taken on a tour to our ancestors’ homeland in Mozambique. It was our first time on a plane. We enjoyed the visit. The people in Mozambique were surprised to see us”

But life is not a rainbow for these women. Their husbands work as fishermen and masons, some doing odd jobs. Their houses were built with support from a German based NGO. The women earn an income by performing at a few shows.

They faithfully attend mass at the Roman Catholic Church of the Holy Trinity located nearby. The Kaffirs of old Ceylon are a forgotten people. As we leave we give the children a chocolate cake. The four sisters stand behind their grand old mother Emaliyana, who clasps my hands in both her hands. It is a moving farewell. With time these four sisters will fade away, leaving behind a unique legend.