Paige Taylor  in The Australian, 13 June 2017,   where the title is “Predator-proof ploy foils feral-fed catastrophe”

Work has begun northwest of Alice Springs on the world’s largest predator-proof animal enclosure. It has come to this for our endangered species. The 185km electrified fence will separate feral cats from the marsupials they have pushed to the edge of extinction.  The non-profit Australian Wildlife Conservancy is buying vast tracts of the bush and fencing out feral cats that kill between five and seven animals each night. 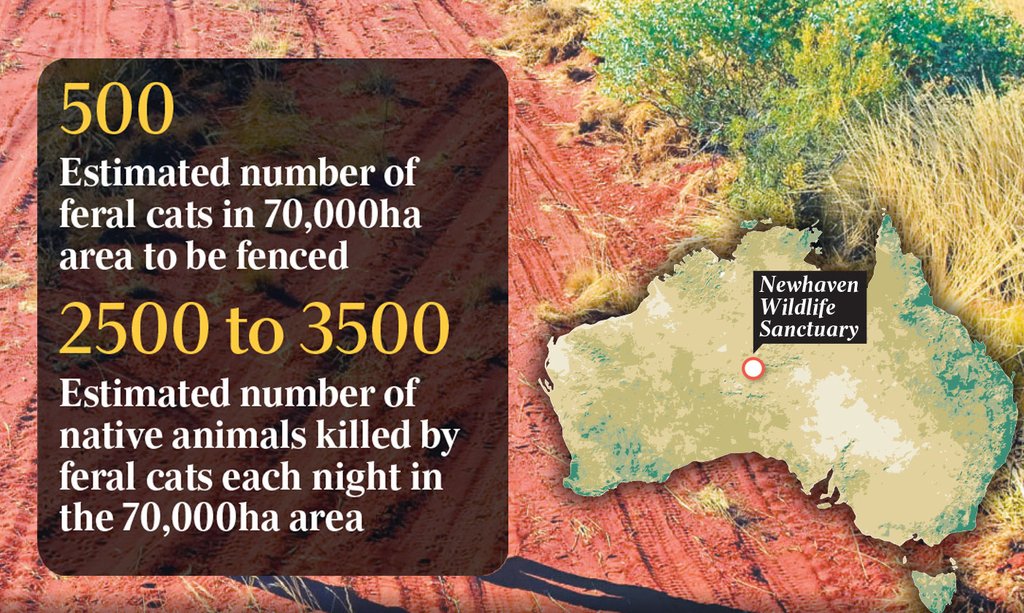 Once the fence is complete and feral animals are cleared from inside, at least 10 endangered mammals will be reintroduced, including some species that have been gone from the region for ­decades. Among them is the mala, or rufous hare-wallaby, which was once common in central Australia but has existed only in captivity since 1991.

The fence will enclose a dramatic, sheer-sided quartzite range that is home to a remnant population of endangered rock wallabies, under threat from foxes and cats. Vast spinifex plains with ghost gums and red sand dunes with desert oak will also be inside the wire. Local Warlpiri men and women have been employed by the AWC to construct the enclosure, first by operating the machinery needed to establish the fence.

The federal government has contributed $750,000 to the work, and Threatened Species Commissioner Gregory Andrews says this is “huge bang for our buck in the fight against extinction”. By early next year, the Warlpiri will have helped mark out and install a 45km fence enclosing 9450ha. It will be 180cm tall with an overhang at the top to stop animals climbing over. It will have a skirt at the bottom to block ­burrowing, and electric wires to discourage repeated attempts.

Throughout next year, Newhaven Warlpiri Rangers — many of them skilled cat hunters — will work with scientists to kill the cats, rabbits and foxes inside. The first mammals will be reintroduced to the enclosure in 2019. 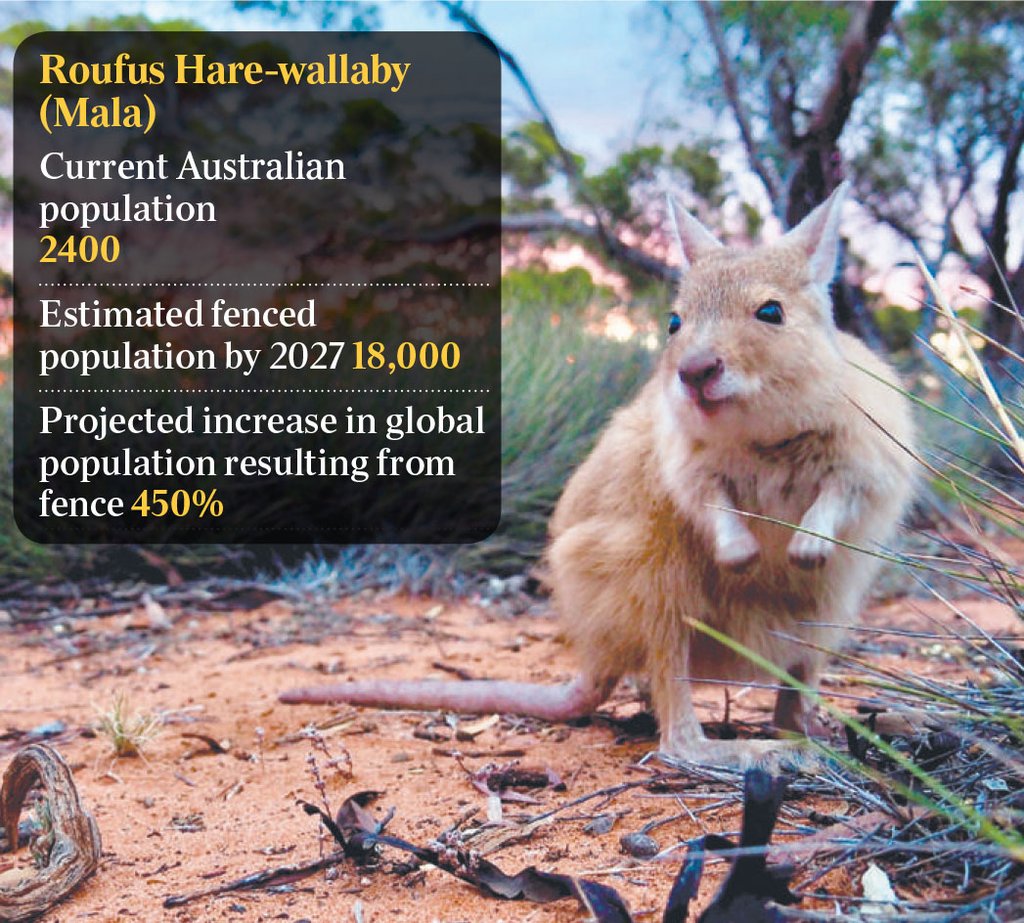 The second stage of the project will extend the enclosure to 70,000ha by 2021. It is one of Australia’s biggest science projects — workers will place more than 35,000 pickets, roll out some 1600km of plain wire and 500km of netting and use 12 million clips to hold netting in place. AWC chief executive Atticus Fleming says the project will deliver a stunning ecological transformation in the global epicentre of mammal extinctions. “Australia has the worst mammal extinction rate in the world and these extinctions are concentrated in central Australia,” he said. 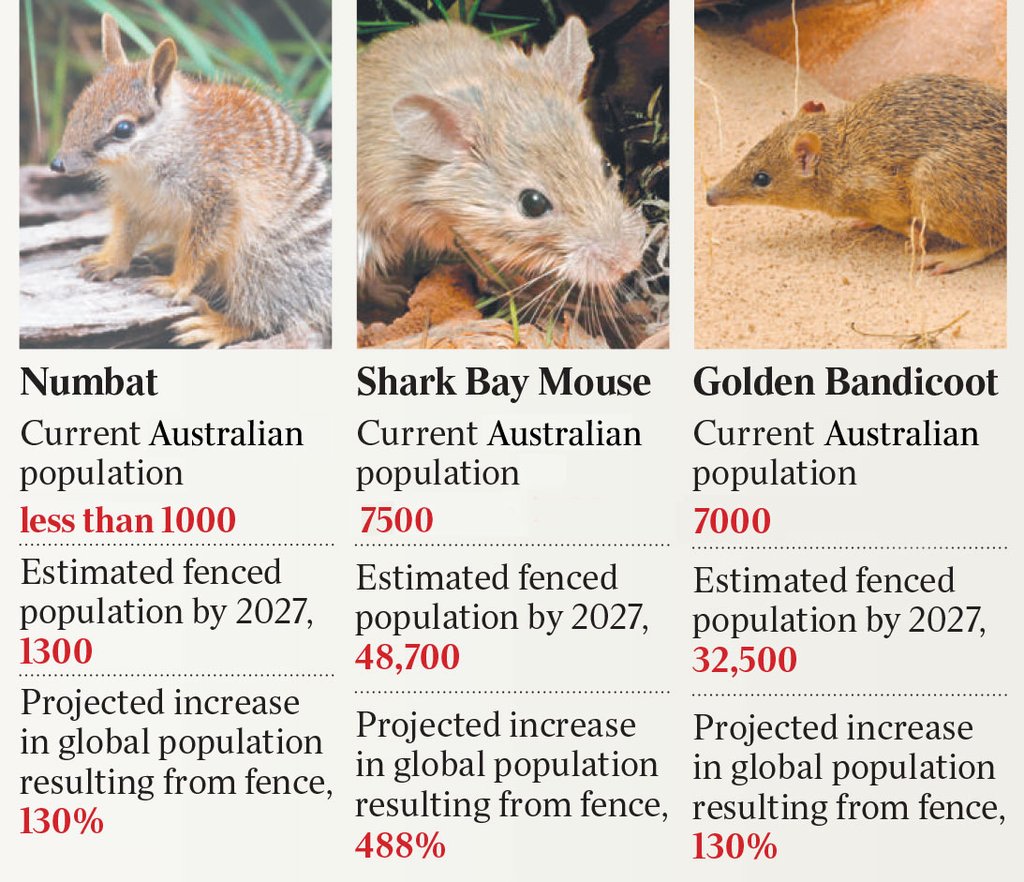 “Mammals that have avoided extinction have nevertheless crashed in central Australia … they cling to survival in low densities and in isolated populations.”

Mr Fleming said the current marsupial “ghost town” was in stark contrast to the scenes that greeted 19th-century explorers such as Ernest Giles, who encountered an abundance of native mammals and wrote in his journal that the hills in central Australia “swarmed” with rock-wallabies. That species is now seriously endangered.

Scientists have for years regarded feral cats as the main driver of extinctions in Australia, a greater threat than land clearing or ­climate change. Mr Fleming said the Newhaven project would be the most ­significant endangered animal project in Australian history, turning back the clock and doubling the population of at least six of Australia’s most endangered mammals and significantly increasing the population of five ­others.