From Tsunami Medical Logistics to IDP Camp Medical Aid, 2004-09; Q and A with Dr Herath

Speaking at Adelaide Universityon one occasion the Australian Ambassador, French, stressed that an experienced disaster relief team from Australia played a critical role in coordinating information and logistics for the massive task of relief and recovery in Sri Lanka after the tsunami of 26 December 2004. I do not have those details. But I can now reveal to those interested how a central coordinating unit of medical personnel played a critical role in organising the medical relief work in the coastal regions of the southwest, south and east that were hit by the tsunami and thereafter directed the tasks associated with re-building the institutions and other medical services that had been destroyed by the waters.

Dr. Hemantha Herath was assigned to the Health Desk of the Disaster Preparedness and Response Division (DPRD) of the Ministry of Health on 28 December 2004, while the Tsunami Rehabilitation Unit was also set up at about the same time with Dr. Thushara Ranasinghe as Coordinator, Planning) and Dr. Eeshara Vithana as Coordinator, Operations. The DPRD and TRU together directed the tsunami relief and re-establishment tasks. Their duties were extended in 2007-09 to handling the logistical requirements of drugs and equipment for the medical aid that was being provided to the Tamil refugees in the Eastern Province by personnel by local and foreign NGOs.

For a number of reasons Herath delayed his sabbatical leave till late 2008 when he eventually proceeded to UK. The unit was still functioning however (now downsized and housed within the offices of the Ministry of Health). The central point is that an experienced team of co-ordinators was at hand when the issue of Tamil IDPs from the north developed in late 2008/early 2009 after a large mass of people were assembled in the Menik Farm camps near Chettikulam over a period of time and especially in April-May 2009. They undertook the duties of (a) marshaling and organizing the erection of temporary health centres within the camps; (b) selecting and assigning doctors, nurses and other staff to service the camps; (c) distributing the equipment and drugs required for the medical centres; and (d) bolstering the pre-existing medical services within Vavuniya District so that they could assist the IDP camps in the handling of more serious cases. 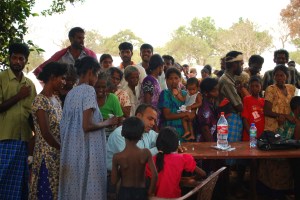 I chanced upon this information after my researches at the Colombo Friend-In-Need Society which supplies artificial limbs to people throughout Sri Lanka and which sent mobile units to fit such limbs on amputees in the IDP camps. Accordingly I set up an interview with Dr. Herath on 16 May 2010. He had returned to Lanka earlier than planned and been assigned in early may 2009 to oversee the re medical work in situ, while Drs Ranasinghe and Vithana manned the HQ organising the logistical tasks. Hema Herath decided to make Anuradhapura rather than Vavuniya his sleeping base. From early May his daily schedule for months on end involved leaving his guesthouse quarters at 6.30 pm in an official car driven by a departmental driver and returning to his quarters around 10.00 pm if not later – the one way traveling time being roughly 60-70 minutes. My information on the gargantuan task that faced by one and all (including Tamil inmates who participated in this endeavour) in this arena from April-May 2009 onwards has also been augmented by an interview with Dr. Donnie Woodyard  of Medical Teams International on 13 November 2010…. Michael Roberts.

Yes.  Initially the IDPs were located in schools etc around Vavuniya.

No. Building of Kadirgamar Village started in early September 2008 and settling of people there was started at the same time.

Before answering other questions you need to be clear about the names of the Villages:

B.   The Field hospital in Zone One designed by Donnie Woodyard was put by IOM in April 2009 right? And that in Zone 3 a bit later?

None of the Field Hospitals were designed by Donnie. But he did a great job by providing all the support to equip the hospitals in Zone 02 and 04 through the Medical Teams International in which he was working.

Zone 3 was basically managed without a field hospital. Same job was performed in 2 primary health care centers. Inflatable tent put up by the WHO and buildings put up by the Mercy Malaysia to be used for a field hospital could not be used effectively for the intended purpose due to excessive dust and gusty winds at that location. But they were used periodically to conduct health camps from time to time.

C.   Can you recall the names of the Italian and Mercy Malaysia doctors who worked at the camps? How long did they stay?

Neither Italian nor MercyMalaysia doctors served inside the camps. They came only to provide the support to improve the facilities in hospitals and primary care centers inside the camps. They also helped to train health workers. Name of Dr. Alberto fromItaly needs to be mentioned here. Only foreign doctors served closer to the camp were those worked in the Indian field hospital (that hospital, though located next to the Zone 01, was also physically isolated from the main village and served to patients brought from other Zone as well).

D.   Can you recall details of the chicken-pox, dysentery and hepatitis epidemics that occurred from time to time?

There were no epidemics that occurred “from time to time”. But when IDPs were brought from the “uncleared areas” there were considerable number of persons suffering from either chickenpox or hepatitis A. We were able to control the spread gradually. There were no fresh outbreaks after May 2009.

We monitored the incidence of communicable diseases to the best of our ability and were able to take action immediately whenever any unusual trends are observed. As with any other community in Sri Lanka these diseases were prevalent among IDPs at low endemic levels which we managed effectively.

E.   At what point of time precisely did the local Lankan doctors feel it was safe to take up residence in the camps itself or in adjacent quarters?

From the beginning there was no question [read as problems –MR] of working inside the camps during day time. But they were reluctant to work inside the camps at night for that we established a Night Centre at the main Health Coordination center in mid May 2009. By early July, we were able to conduct night centers inside all major welfare villages.

We had an issue of sending doctors the quarters built inside the Kadirgamar Village and in and around manik farm area. That was not due to security reasons but due to trade union pressure and other unrelated and mostly trivial reasons.

F.    When in 2009 did the Indian Hospital shift from Pulmoddai to the menik farm area? into what zone?

Indian hospital was shifted to menik farm in early June and was there till early September 2009. This was located next to Zone 0

G.  A foreign aid worker who was associated with the Menik Farm relief work told me that he saw “pictures of children with their skin completely burnt off and [that] medical experts told me that was white phosphorous” when he brought up the issue of CLUSTER BOMBS being used by the army or air force. SO, allowing for the problem of the second hand character of this assertion my QUERY is can skin be burnt of from other types of bombs or whatever?

This is why the government did not want foreign aid workers inside the welfare villages. Whenever they find something, they try to dramatize it so that they can secure their jobs.

I saw many people including children suffering from burn wounds of varying degrees. They were all treated and sent back. Probability of surviving is minimal if the skin is completely burnt off. All what I saw were partial burns. Most of them were, according to them, due to catching fire to their temporary shelters while cooking or from kerosene lamps. [A] Few told that they had to walk through fire while crossing the battle line. These patients were subjected to a thorough examination by a team of medical, surgical and forensic specialists appointed by the then Secretary/Health reported that none were due to any kind of chemical.

Skin can be burnt if a person was staying next to an explosion. But there would be more fatal injuries by the pressure wave and the shrapnel.

I have answered to the best of my ability and feel free to ask for further clarifications.

H1. I have limited knowledge of the health facilities provided in any small size locality in say Polonnaruwa District or Bintenna or the Uda Walawe area, but would it be fair to say that the Filed Hospitals and other care facilities on offer there were superior to those available in any outlying small locality? and …. H2. … better than the facilities available at Chettikulam before Menik Farm emerged?

[The] Health facilities in Menik Farm and other rural areas cannot be compared as the purpose of building them is different. In general, rural health facilities inSri Lanka are permanent structures. They provide basic health services. If it is a hospital, it runs 24/7. those who need more specialized care are transferred to larger hospitals. Specialists usually do not visit these hospitals. There are no nurses in rural hospitals.

In contrast health facilities at Menik Farm were temporary structures

I.                  What precisely was Chandrasegar Soloman’s role in setting up the Health facilities? What was his designation and how long was he stationed there?

While working in the Epidemiology Unit as a postgraduate trainee, he was sent to Vavuniya to assist the Regional Director. He was instrumental in preparing the master plan for IDP Health care.  He was there from February (not sure as I was not in SL when he was sent) to May 2009 as a government officer and after that joined the UNICEF where he is now working and continued to engaged in IDP health care.

J. During the period from 2005 to 2008 the Disaster Preparedness and Response Division (DPRD) of the MoH was evolving to the present status and many of the disaster related activities took place without the knowledge of the DPRD. Therefore, I cannot confirm or refute such activities during that time. I knew the presence of Australians but not sure what they did.

Two days after the tsunami, I was posted to be in charge of the Health Desk of the Center for National Operations (CNO) at the Presidential Secretariat where I worked for one month. Later, I was asked to develop a unit to coordinate disaster preparedness and response activities at the Ministry of Health in 2005 and we managed to open it officially in February 2008. We also had the Tsunami Rehabilitation Unit (TRU) started in 2005 at the same time where Drs Eeshara and Thushara were working. They were the people who did a wonderful job there. To my knowledge, they coordinated around 80 projects single handedly. Activities of the TRU were also brought under the DPRD but by that time, the bulk of the work was over.

Involvement of the DPRD in providing relief to people in North and East increased since 2005 and was coordinating almost all affairs from early 2009. As you have mentioned I did my job at Chettikulam and Eeshara and Thushara supported me from Colombo.

7 responses to “From Tsunami Medical Logistics to IDP Camp Medical Aid, 2004-09; Q and A with Dr Herath”