A History of the Colombo Railway Station via Familial Lore

The Colombo railway station opened for operations officially on 2nd October 1865 when a Revenue Train was despatched to Henerath-godde. The Colombo Railway Station had been planned and constructed with passenger friendly facilities (Ladies’ waiting rooms etc). 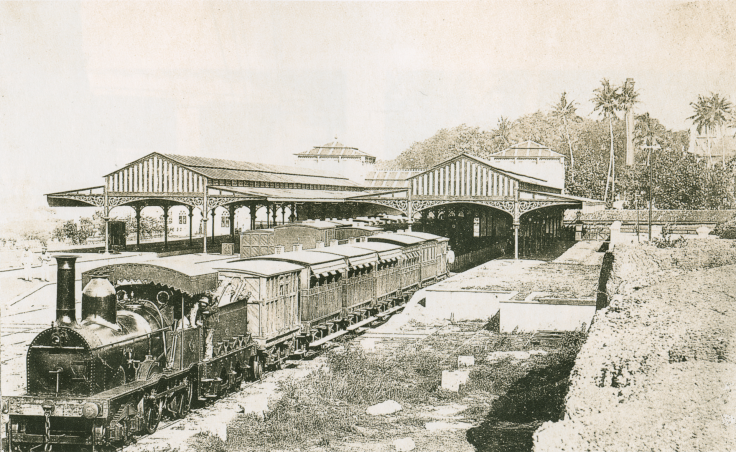 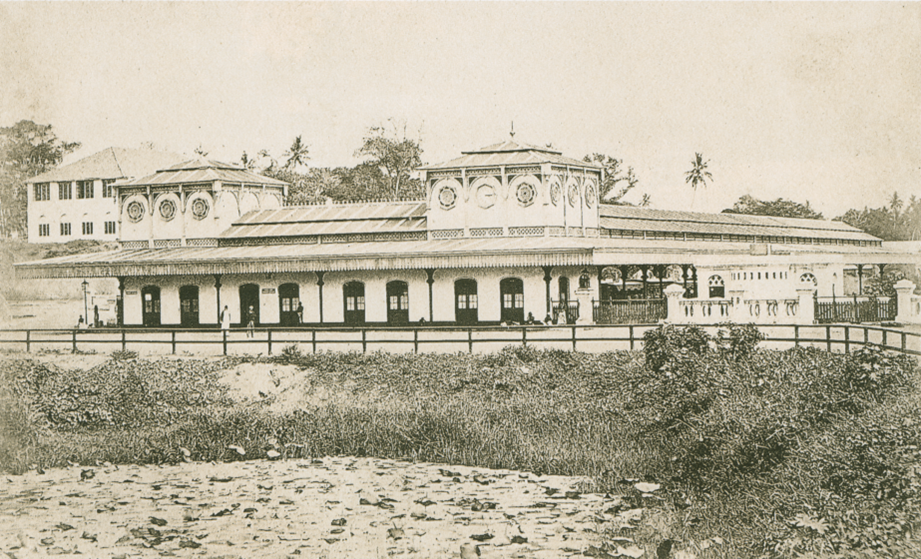 Operationally known as TERMINUS, a term used up to 1908, this startion was closed to make way for the new Railway Stores, about 2/3rds had been demolished. The new RAILWAY MUSEUM is being developed within this.BACKGROUND to my Personal Connection with the Colombo Railway Station

My Maternal Great-grandfather had been a Proctor’s son from Kegalle, who had schooled at St. Mary’s College. The Father being a Proctor had introduced him to the Ceylon Railway to work as a Junior in the COLOMBO RAILWAY STATION to learn Telegraphy, Traffic Department Operations and Railway Accounting. Juniors were expected to be very ‘versatile’ to engage even in Manual Work (Lamp Lighting, Office House-keeping, issuing Tickets, taking the Loud-horn to Control Crowds and Announcements, delivering Correspondence to the GMR etc.)

The Railway Station Junior had been staying with an English family near the Railway Station, and, then, after a Service Promotion married and settled in Mabole, Wattala. In the mornings had come to Colombo on his Phaeton with his wife, schooling children and two Ayahs. The General Manager had given Special Permission for his family to be in the Railway Station in the afternoons.

The Station Officer had got a special Pushing Cart made with Seating for children, their mother and the Ayahs. The Childrens’ Seats have had Lockable Strapping Devices, this Platform Transporter had been pushed around (without disturbing Operations and other Passengers) so that the son and the girls could observe the ‘Happenings’ in the Station. (One of the girls was eventually my maternal grandmother.)

Remembered were three boys coming from Matara, once in three months, the elder boys had boarded Tram Cars to Kotahena, the younger boy (said to be very inquisitive) named Lionel Wickremeratne, remained in the Station, noting down Details and left after an hour to board a Tram to go to his School Boarding at Saint Thomas College in Mutwal (eventually my Paternal Grandfather), further he had been a Medical Assistant (Junior Doctor) in the Railway Dispensary in later years.

The boy in the family of my grandmother remembered the large board in (English only) C O L O M B O and in a Store Room an abandoned FARES GUIDE BOARD with Pricing in Pounds, Shillings and Pence. They also remembered the SUNDIAL in the front garden. Grandmother called it the SUNCLOCK.

They remembered the Station being ‘broken down’ and the family sent to another place along the Kandy Railway Line.

The CRS had served the Employees of the Railway Workshops, the Printers, and the High Courts among other establishments.

My maternal grandfather had come from Galle, had been in a boarding-house nearby to attend Colombo Technical College. In later years, he came from Galle, took the Harbour Tram to board his Steamer to Mombasa (He had been in the East African P W D.).

PETTAH RAILWAY STATION had been established in Central Pettah, a busy place, serving the needs of Traders, Gas Company Employees, the Colombo Municipality, Church of St. Philip Neri, Police Station, Colombo Academy, High Courts, the Kachcheri, and the Markets. (This had been opposite the M. D. Gunasena Books Shop of present). Since the new Fort Railway Station had been established in 1917 nearby, this had been closed.

FORT established in 1878(the location of the Secretariat Halt) with a Wooden Structure, served the Army Barracks, Department Stores and the General Administration.

A new larger Station for Fort had been built in 1883 (on the bend behind what is now Lake House) and used till 1917, this had been a Tool Room and later the EMPLOYMENT EXCHANGE.

All Lines had been Single, Track Duplication was introduced in 1913.

MARANDHAN had been a platform adjoining the Terminus, shifted to Purana Veediya in 1893 and NEW MARADANA opened in 1908. The Kelani Valley Railway had originated here about 1900, the First Station on the Narrow Gauge being Baseline Road, next Cotta Road and the next the Halt at Manning Town.

On the Broad Gauge, a branch (Break-Water Line) skirted a part of the Beira Lake toward the Galle Gate of the fort, and laid on Galle Buck to the Docks and Wharf Station.

The Southern Railway had its First Station at Slave Island (serving the Ice Company, H. Don Carolis, the Army and the Galle Face Hotel, next Kollupitiya, next Bambalapitiya and Wellewatte.

I was taken to the CENTENARY CELEBRATIONS with my Parents, Maternal Grandmother and the Grand-uncle. They took me around the old building and pointed out to a new-looking Tri-lingual board which read Colombo Terminus Station, the grand uncle said this was ‘in error’, the station has only had large boards in English only  C O L O M B O.

I remember two trains said to be leaving for Ambepussa, one was Steam hauled (the oldest running locomotive had been ’dressed up’ as much as possible to resemble Locomotive No. 1.) Victor Melder informs us that the Diver was Robertson and the Fireman Tony Melder. The Newest Diesel hauled the other, an M2 with Reggie Solomonsz at the Controls.

The Seniors also showed me the former Ladies Waiting Room (now Peoples Bank) and other ‘places of interest’.

My Great-grandfather had later been a Railway Broker (some say Station Master) provided with a Telegraph and Telephonic Line at home (Wattala No.4) to issue Handwritten Tickets and Goods Bookings, He was said to be the SM in Rambukkana. In later years.

Since the children were schooling in Colombo (St. Josephs and Good Shepherd), they were left with their mother in Wattala, going up to Rambukkana during the School Holidays, their father being a Railway Broker was resident in the Station Bungalow only for short durations.

Occasionally their father shifted to his Parental House in Kegalle which had a Telephone.

The Proctor had lived to His 68th Year and has had some ‘British Money’ Train Tickets and Royal Mail Coach Boarding Vouchers, Grandmother , as a child  had  been given them but had not kept them.

After serving the Railway my Paternal Grandfather was the Medical Officer of the Lunatic Asylum in Angoda, then the DMO-Kalutara, DMO-Badulla, Resident Medical Officer- Welikada Prison. In 1939 he proceeded to England to do his RCS (Royal College of Surgeons) exams (with my grandmother and father as a young child  accompanying him). But, after a Vacation in 1942 n Ceylon, he could not get back as the War was in ’full swing’, settled in the house he built on Flower Road.

Grandfather being a Railway Enthusiast had been keenly observing trains at Maradana, he had   pencil sketched locomotives. Father showed me his sketches, as I remember with accurate Wheel Arrangements and matching numbers. He has also photographed trains.

In addition, once a fortnight he telephoned the OA of the GMR to obtain Appointments, Rickshawed or Tram-car ride to the GMR’s Office where he had been warmly welcomed to talk about Railways. Some days had the luxury of the GMR sending his car or the Doctor giving his Phaeton and Coachman to go direct to the GM Office.

The GMR had gifted some photographs of the Kandy Line being built (these had taken a circuitous route (even being in Canada) and ended up with me). I plan to GIFT these original Faviell Photos to our new Railway Museum

Remembered was a visit of the Crown Agent with a Representative from a Firm in Manchester, they have had with them a mock-up model of a Flexible Framed Locomotive with a ‘lot of wheels’, said to have the Power of Two Locomotives, but could be operated by One Crew on our Upper Section.

Remembered was the discussion that Scientists in Europe and America had developed Compression by Ignition, Oil -burning Power-plants which could be configured as a larger version of a Motor Vehicle Engine and mounted within simple box-shaped locomotives.

The vociferous Manchester Man had claimed: ‘MARK MY WORDS: In Half a Century, the present type of coal eating fire breathing Black Demon Locomotives would be scrapped or a Few on Museums, vividly coloured, streamlined Oil sipping locomotives which could be operated by just a Driver would rule your rails’

I was raconteured these happenings by my Father (Word by Word) as he was told by his father). Grandmother and her elder brother elaborated their experience of the Colombo Railway Station.

Jamis Rajapaksha (1906-2014) had been my great-grandfather’s Railway Batman. I was present when Mother and Grandmother met him in Kegalle, January 1st, 1969, I was not knowledgeable to prod Detailed Questions, but Super Anecdotes of Yore came to light.

I met Jamis again in 2012 when Aged 106, his Memory was clear but he was Part-blind, said his father had been a Messenger (Aged 12) for the Faviell Sir digging tunnels in Alagalle.

Their father had Joined History In 1929.

My Maternal grandfather passed away in 1963.

The abandoned Colombo Railway Station was ‘spruced up’ for the Centenary Celebrations after which it lay decrepit and derelict, again gaining a ‘lease of life ‘in the Year 2000 for RAIL 2000. Then in 2009 a small Museum was established. (This is now being developed as the new National Railway Museum)