Maani Truu, in ABC News, 29 January 2022, where the title runs thus: “After the peak: What’s in store for Australia now that the Omicron wave has turned?“

The end of 2021 was meant to herald the arrival of Australia’s “hot vaxxed summer”. Despite concerns over a slow start, vaccination rates were high, marathon lockdowns had ended, and international border closures — the country’s first line of defence against COVID-19 — had finally started to lift after nearly two years.

The end of 2021 was meant to herald the arrival of Australia’s “hot vaxxed summer”. Despite concerns over a slow start, vaccination rates were high, marathon lockdowns had ended, and international border closures — the country’s first line of defence against COVID-19 — had finally started to lift after nearly two years.

While no-one predicted the pandemic would suddenly vanish, what actually happened was equally unexpected for many: after years of mostly keeping the virus under control, by the start of the second week of January Australia had surpassed 100,000 new cases a day.

The culprit was Omicron — a new, highly-transmissible variant that arrived on Australian shores in December and quickly spread throughout the country, aided by its ability to evade antibodies from past infections and vaccines.

Now, in all states other than Western Australia (which remains closed off to the rest of the country) it appears we have reached the peak of the Omicron wave.

On Friday, Australia recorded just under 40,000 cases, down from a high of more than 120,000 cases a day earlier this month. “We can see it plateauing,” says Catherine Bennett, the chair of epidemiology at Deakin University, noting that infection rates have been steady for about two weeks. In NSW, one of the largest drivers of the early wave, daily case numbers are hovering around 20,000 a day — a number experts say still puts too great a burden on the healthcare system.

Hospitalisation rates have also stabilised nationally since midway through January, while the proportion of people testing positive on PCR tests has also dropped.

Death rates, which typically lag behind infection rates, unfortunately, remain high: 98 deaths were announced on Friday, including 35 in NSW and 39 in Victoria, marking Australia’s deadliest day of the pandemic.

LIVE UPDATES: Read our blog for the latest news on the COVID-19 pandemic

“Every sign is good that infection rates are reducing,” Dr Bennett says. Adrian Esterman, a professor of biostatistics at the University of South Australia, is similarly confident that we’ve reached the peak in all states and territories, excluding Western Australia.

What remains, however, is a very different understanding of the pandemic. As Australians embark on the journey of “living with the virus”, as often touted by political leaders, what will that actually look like after Omicron?

The next two weeks

While most experts agree signs suggest we’re on the other side of this wave, that doesn’t mean we’re going to see a smooth, or swift, decline in case numbers. The Omicron variant spread rapidly in Australia, helped along by unfortunate timing: the highly transmissible virus arrived on our shores just as restrictions were lifting and the holiday period, with all the associated social gatherings, was on the horizon.

Charting the COVID-19 spread in Australia

This data shows how Australia is faring in the fight to suppress the spread of coronavirus.  Young adults in their 20s drove the wave, with a number of superspreader events early on lighting a spark that couldn’t be extinguished. But Professor Bennett says the virus has now spread outside these communities, which means the decline will be far less quick.

“While the rise was really rapid, because you’re adding in new outbreaks really quickly, the decline is slower because you’ve got widespread community transmission,” she says.

Meanwhile, other experts, such as Colleen Lau, an infectious disease expert with the University of Queensland, are more cautious of “declaring victory” over the Omicron outbreak. This is because there’s still uncertainty over the true number of cases in the community, due to unreported rapid antigen tests (RATs), asymptomatic cases, and people who haven’t got tested at all.

“Hopefully we are [over the peak], but we are relying on a lot of people submitting their RATs and a lot of people who aren’t even getting tested or don’t have access to tests,” she says. “I would be very cautious with declaring victory and saying we’re going to be back to normal in a few weeks or months.”

Another curve ball will be the beginning of a new school year next week; children returning to classrooms, widespread screening testing, and increased movement could mean an uptick of case numbers in the short term. But this doesn’t necessarily mean there are actually more cases — it could be asymptomatic cases that previously would have gone unrecorded are caught.

“In the first week, we’re going to have screening in place for children that we’ve never had,” Professor Bennett says. “Even if nothing changed, we would still see a bounce up in cases … but we expect the numbers to also rise just with the amount of mixing.”

NSW and Victoria have strongly recommended all primary and secondary staff and students undergo twice-weekly RATs. South Australia, also going back next week, will instead use a “test-to-stay” strategy focused on close contacts. Meanwhile, Queensland has pushed back the start of the school year to February.

Professor Bennett is hopeful the increase in cases will not exceed the peak of the outbreak but says the data over the coming weeks will be difficult to interpret because of the new systems. Conversely, if the increased screening does not lead to a large spike in cases, she says that will be a “good sign” that there are not many cases going unrecorded. “I think we have to brace ourselves for more numbers,” she says, “then we just have to wait to see what that means: is it really more cases or does the hospitalisation data stay the same and it’s actually just the proportion of cases we are picking up through testing that changes?”

The next two months

By the end of March, Australians will be well out of holiday mode and back into the swing of day-to-day life. What this will look like is hard to say before the impacts of the next few weeks are felt, but Professor Bennett suggests it’ll be a gradual adjustment towards the “new normal”.

“It won’t be a date where we come out of lockdown and we’re all free again,” she says. Instead, as cases come down, she predicts “a natural progression of fewer workplace shortages, more people able to leave their homes because they’re not isolating, more people trusting going out to restaurants.”

Without case numbers to look to for what is normal, Professor Bennett says the new standard will be whether businesses can operate normally, the healthcare system isn’t overrun, and people are able to move around freely. This will be impacted by growing numbers of people who have recently recovered from the virus, and are therefore exempt from isolation, and changing quarantine rules around the country.

“We had a quarter of million people who were active cases in NSW, and those people don’t have to quarantine for another month if someone else in their household gets infected,” she says, “that takes the pressure off”.

But Professor Esterman expects little to change in the next few months. He says this means continuing to manage the load on our hospital system with boosters, social distancing measures, mask-wearing, and some restrictions.

Two years ago today, Australia first joined the COVID club. Within days we’d have more cases, within weeks our own lockdowns.

“We don’t know whether this plateau will be temporary and then we’ll keep going down or whether we’ll be hit by another variant,” he says.

As long as there are pockets of the world that remain unvaccinated, he says, there is an opportunity for new variants to emerge. He describes the pandemic as like the sea: after one wave ends, another one will come crashing in. And while we really have no idea what the next variant will look like, Professor Lau says, “One thing we can be sure of is that there will be more variants.”

Already an offshoot of Omicron, labelled BA.2, has been detected in dozens of countries, including Australia. Early research suggests it could be more infectious than the original Omicron strain, but likely of similar severity. Given the uncertainty of future variants and the coming weeks, Professor Lau is hesitant to predict what our lives will look like at the end of March. “I’m not sure we’re quite ready to say what the new normal is going to look like,” she says. “We’re still in the midst of a very large outbreak right now.”

With the ever-looming threat of a new variant, experts say the greatest hope for a ticket out of this pandemic is a “universal vaccine”. This refers to a vaccine that has been developed to protect against all possible variations of the virus, not just the ones we know about.

Research is underway into creating such a vaccine, but Professor Esterman warns it’s unlikely to be here before the year is up. That means we’ll still be living alongside COVID in 12 months time.

The race is on to find a variant-proof vaccine

In a state-of-the-art science lab, nestled into the genteel slopes of the NSW Southern Highlands, a group of genetically engineered mice have become frontline soldiers in the fight against COVID-19. 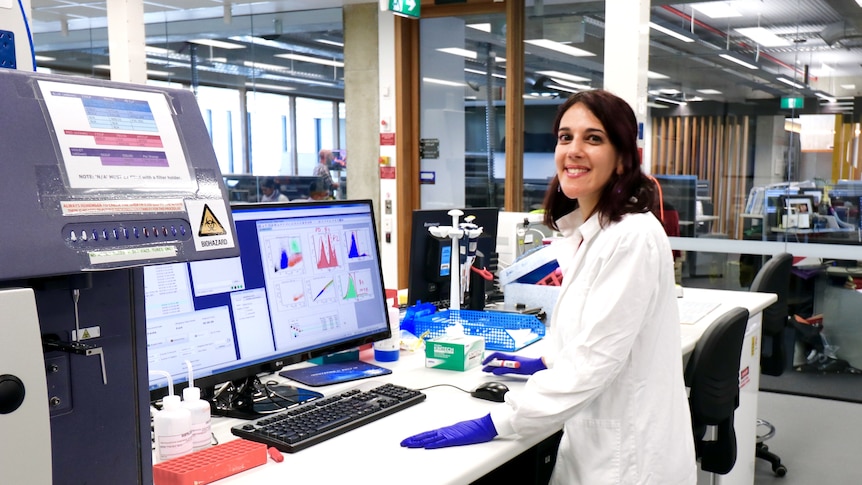 Asked what life will be like in Australia at the end of the year, he predicts “not much different to how it is now”. “People like me who are high risk will still be sheltering and keeping away from others; younger, fitter people will go about doing their usual things, their lives won’t change much,” he says. “It’s really those at risk that will really have to be careful.”

Some good news is an Omicron-specific vaccine will likely become available this year, and while not guaranteed to protect against possible future variants, it could provide an extra layer of protection against the current strain. Professor Esterman is also hopeful vaccine rollout efforts in developing countries will speed up over the coming year, with greater global coverage going some way to reduce the chance of further variants.

In Australia, the combination of past infections and boosters will also help reduce our vulnerability to new variants, Professor Bennett says. This will be a key step in transitioning into a future where COVID-19 is treated like any other infectious illness.

“We’ve got this snowball effect where we’ve got a bigger impact from COVID than we would for any other illness because we’ve got this cotton wool around cases trying to dampen the risk of transmission,” she says. “But as risk dies down with exposure in the community lessening and more people have the booster so we’re less worried about it taking off and causing severe illness, that’s when you pull back on those sorts of things.”

Like the transition towards the “new normal”, the end of the pandemic — when it eventually comes — will not be clear cut. Some countries will declare it over before others, unexpected outbreaks will spring up, and less vaccinated countries will continue to struggle under the weight of serious infections.

“We’ll be waiting for things to happen, watching the case numbers, and suddenly realise we’ll haven’t thought about COVID for three months — and we’ll look back and go, actually, it’s wound down, it’s over,” Professor Bennett says.

“It’s really when you’re past the peak that you can see the peak.”

What you need to know about coronavirus: