I write on behalf of the Lanseelam Association of Australia Inc., a body which was recently formed for the purpose of defending the rights of Burghers in Sri Lanka.

For long we Burghers have suffered in silence and watched with rising indignation the gradual erosion of our rights and privileges in the land of our birth. From the position of total supremacy which our forefathers formerly enjoyed, we are now being reduced to voices crying in the wilderness. Not only have we been stripped of our former high social position, but even economically and politically we have degenerated into an oppressed and downtrodden community.

The noble struggle of some of our Tamil brethren for a state of Eelam has now quickened our failing spirit and spurred us on to demand a similar recognition of our rights. We therefore feel justified in stalking our own claim to a section of Sri Lanka, stretching from Galle Face Green to the Bambalapitiya Flats. This territory will be designated LANSEELAM (Lanse-Eelam) and will comprise a safe haven for those of us whose culture has recently been threatened with extinction.

English will be the State Language and medium of education in Lanseelam. A certain measure of social intercourse with the natives will naturally be permitted, but legislation will be introduced to prevent over-familiarity. Severe penalties will include that dreaded torment “Deprivation of Liberty and Lampries for 20 years”. Dutch will be our second language, and we will constitute the lingua franca of the new Parliament shortly to be set up within the hallowed precincts of the new B.R.C. Headquarters at Wolvendaal.

We have sent urgent communiques to our fellowship Burghers scattered throughout the world, informing them of this venture, and soliciting their support. By the Ides of March we will estimate that fifty-thousand Burgher Loyalists (hereafter to be known as the Wolves of Wolvendaal) will land on our shores at Bentot and Hambantot, and March in a glorious struggle for freedom and Lanseelam! Those who have eked out a miserable existence overseas for years, in lands where the Breudhers never rose and the Love Cakes never set, where hearts ached for the absent scent of the Kehal Kola in the Lamprais packet and the powerful perfume of Poffertjees at the tiffin table … all these will now come to their own again.

They will return en masse to claim the Lansi heritage of yore, and are ready to die in the attempt. They will march against the Jey-ward-ners and Band-rer-nyakas and other such Sinhalese oppressors. Summoning up their ancient Dutch courage they will march forward relentlessly.

They will march from Galle to kerney-Galle, and from the Cock-eye-Kade kada payliya to the New-Ray-Liya, gathering support from their long-suffering kinsmen en route.

We therefore write to give you prior notice of our intentions, and to request you to solicit the support of the local Burgher community for this most worthy cause.

As you are well aware, we always prefer to utilize peaceful democratic methods in the pursuit of our legitimate aspirations. If these fail, however, Other Means will be resorted to and the Liberation Tigers may well be joined by the Liberation Wolves of Wolvwndaal.

We have been shocked and disgusted by the article on Lansieelam in “The Island” of 20.1.85 and the letter on the same subject published by you in “the Island” of 27.1.85. Jokes associating Burghers with ‘Cockroaches’ are not funny but offensive and insulting to a whole community. We are surprised that “The Island”, which often professes liberal opinions on ethnic questions, should tolerate such racist humor in its columns. While jokes of this kind may be offered as “just good fun”, it should be realized that they serve to reinforce those attitudes of race prejudice which have done so much damage to our society.

We hope that you have the honesty to publish this letter.

One of  Sri Lanka’s greatest assets has been our ability to laugh at ourselves. Whether it was “He comes from Jaffna” or the Sinhala Buddhist astronaut who refused to work on the Moon as every Poya Day was a holiday.

Sri Lankans of all communities have always been able to laugh at themselves and not viewed themselves through race colored spectacles.

Alas judging by this letter of Reggie Siriwardena et al, even that Sri Lankan asset has been taken away. Mr. Siriwardena and company appear to have failed to marshal even a single red blooded Burgher to their cause. We however wish to inform this group of prude monitors of racial relations that “Lansieelam” was written to us by a Dutch Burgher who would have defended his race whatever the hour of the day at any bar-legal or otherwise. We regret their migration, for it shows what we have lost.

Literary critic Reggie Siriwardena will no doubt recall the owrds of Robert Burns written “To a Louse”:

‘O Wad some power and giltie gie us,

To see ourselves as others see us’

The drawing and the text have been extracted by Kalani Abeywickrema of the Fort, Galle from M Roberts et al, People Inbetween, Ratmalana, Sarvodaya, 1989

Note that the sketch and the newspaper exchange occurred as the year 1985 dawned. ….. Let me reiterate that in larger print: 1985 January. Though Sri Lanka had been through the horrors of an anti-Tamil pogrom in late July 1983, it is probable that most of its thinking citizens were not fully alive to its impending implications –set out here in point form.

A = Through its agency RAW the Indian government was supporting and training the members of several militant SL Tamil rebels, notably PLOTE, LTTE, EPRLF and TELO — with TELO reckoned to be the strongest o the lot.

B = The seafaring background of personnel from the Karaiyar concentration at VVT (Prabhakaran’s home town) provided the LTTE  with an edge over the other rebel groups and this was consolidated when the Tigers secured a shipment of arms (from Eritrea I believe) to be delivered to them in southern India –a capacity marking the organisational genius of KP Pathmanathan (Prabhakaran’s best man at his wedding in India and a man from VVT) which provided them with a measure of independence.

C = The ruthless efficiency of the LTTE in its pursuit of dominance — displayed for instance a few months after the Lanseelam cartoon appeared in print in late April 1986 when the Tiger forces in the Jaffna Peninsula marshaled by Kittu battled the TELO forces and eliminated a significant number — see http://www.uthr.org/BP/volume1/Chapter5.htm where this account appears: “The manner in which the T.E.L.O. members were killed, shocked Tamil people everywhere. Many died without knowing what hit them. Twelve were killed near Manipay while they were asleep. Several were caught unawares, shot and burnt at junctions at Thirunelvely, Mallakam, and Tellipallai. Eight persons were killed at the camp behind the St. John’s principal’s bungalow. One person was thrust into a car, which was then exploded, leaving severed limbs strewn around. On hearing this the St. John’s College principal, Mr. Gunaseelan, who was in hospital, had a relapse which forced him into an early retirement. Many of the T.E.L.O. members who were from areas outside Jaffna had to flee in fear without knowing the streets or where they were going. The people were so terrified, that few found the courage to give shelter to the fugitives. While this unprecedented display was on, people stood mutely at junctions and watched, as persons hardly dead, were doused and burnt. Hardly anyone protested, which is understandable. Some went home saying things such as: “We have produced our own Hitlers.” Others gave a display of that opportunism that had become a characteristic feature of Jaffna. Some shop keepers offered aerated waters to those who had exhausted themselves putting on the show. Some students at the University attempted to take out a procession to stop the fighting but had to abandon it. The fighting was over in less than a week and Sri Sabaratnam was killed in circumstances which are not clear. Most sources agree that he was wounded in the shoot out, while his two companions escaped. Sri Sabaratnam then stood up and requested an opportunity to talk to Kittu, the Jaffna L.T.T.E. leader. He was then gunned down. Whether he was killed personally by Kittu and whether the order to kill him came from Prabhakaran himself, or from Kittu, are matters on which the various reports disagree. All this time the Sri Lankan army had remained quiet except for a bit of helicopter firing here and there. Outsiders saw the L.T.T.E.-T.E.L.O. clash as fatally weakening the militant cause. Kautiliya, a columnist for the Sunday Island asked satirically whether the L.T.T.E. had taken a sub-contract with the Ministry for National Security to take on the T.E.L.O..”

D = The fuller implications of such developments eventuated when the Indian government intervened with  military force in July 1987 and brought the LTTE to Jaffna and forced the Jayawardene government to accept the Indo-Lanka Pact. 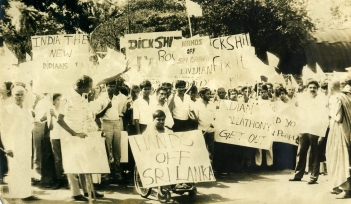 Eustace Rulach could not have divined these events. His word-play was perhaps hilarious then ….. For some.