Bouncing into the Unknown Seas …. and Cliffs … to meet Lord Shiva

About 500 yards north of the hotel Trinco Blu at Nilaveli is a small rock promontory where a river inlet streams into the ocean. The inlet connects with the Tamil village of Thalli which is adjacent to the renowned temple of Thalli abutting the rock promontory on its northern side.

When I wandered down that way one morning with camera in hand, I was greeted warmly by an imposing 6ft/4 gentleman who introduced himself as Naguleswaran. He ushered me into the small lagoon crowded with shallow-bottom motorized fishing boats and showed me his boat.

I reckoned that he was perhaps a village notable and perhaps even a trustee of the Thalli temple. Given his age (born in the 1950s?) I surmised that he would be a good source of ethnographic information – his modicum of English skills in the face of my non-existent Tamil notwithstanding. My target was data on his personal experiences in the war years 1983-2009.

When Naguleswaran suggested a meeting and a boat ride that evening , I jumped at the opportunity.

Little did I know what I was in for!!

When we met he ushered me to his boat where his deckhand-boat captain was in place. I was given a life-vest and helped into the motorised boat with its eight seats (the standard form). We chugged into the wide wide seas and turned north for me to take shots of the temple Thalli from the seaside.

And, THEN, the boat was turned south and headed for the prominent promontory of Konneswaram about a mile or so distant to the south. The skipper and lone hand then gave it the boost.

Bloody hell! Volaare! It was bounce body boogie in those rolling seas. I hung on with one hand and both feet braced – my aging torso wandering about its future. My other hand, I stress, clasped my TABLET as I worked out how to take pictures. 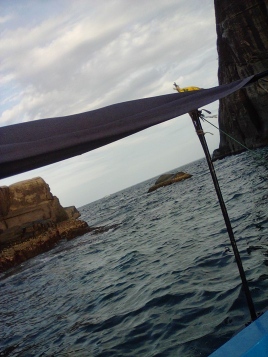 And so, we reached the substantial rock promontory lorded over by Lord Shiva – cast as huge golden statue above his temple, an abode drawing thousands of worshipers  (both Hindu and Others) seeking solace and concrete aid in support of their aspirations.

That statue may be gigantic, but from where we were down there rolling about in the swells in the seas below it was a mere speck (as my camera confirms). Still, the scenario and opportunity was unique. Those rocky cliffs with its scrub and trees and the occasional sight of the temple walls and Lord Shiva, were certainly imposing.

I was fully aware, too, that those cliffs had served as springboard for many a suicidal leap. So …. I did wonder how many skeletons lay below us in the seabed. …. and I noticed two sea eagles perched on jutting portions of the rock-face located about half-way down the large cliff promontory. Their thoughts and goals? Food no doubt.

And, then, it was time to turn north and return,

At speed. Bounce body boogie once again …. bounce damn bounce ….. past a naval attack craft parked on some mission – and a chance to take some shots of the many motorized shallow draft boats parked on the sands along the show – in contrast with a few small trawlers parked in the seas.

Naguleswaran was on hand to greet my battered bones when we got back to shore near Thalli. I knew why. I dished out Rs 5000 and then added another Rs 3000. He was mighty pleased.

You guys are witnessing my hard-won fruits.

And let me stress that the figure of Shiva is quite imposing when met face-to-face on land.

One response to “Bouncing into the Unknown Seas …. and Cliffs … to meet Lord Shiva”