As a popular tourist attraction in the country, Mannar boasts of a rich cultural heritage dating back to the Portuguese, Dutch and British periods. Dotted with palmyra trees and a scenic stretch of the Northern coastal belt, it is a popular destination for nature lovers as well.  During the flamingo season, the pink, red or orange feathered visitors frequent Mannar’s wetlands till the end of March. 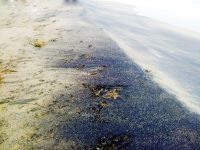 However, Mannar has also been identified as a potential location to resume a large scale mineral extraction operation by Australian mineral exploration company Titanium Sands Ltd. It is said that mining and quarrying contribute to just 2.9% of GDP, and by expanding this segment, many natural resources could be used locally, thereby saving a greater chunk of finances put in for imports. Hence environmentalists are concerned as to how long Mannar’s scenic beauty would remain in the backdrop of these projects.

Mannar Island geology
Known to be the largest chain of sand islands and shoals in Sri Lanka, the Mannar Island spans an area of 140 square kilometres. Sand accumulated over years from rising sea levels have stabilised along its coastal belt.

Driven by the prevailing nearshore currents and general circulation in the Park Strait, the sediment transport along the North-Western coast of Sri Lanka has been northwards until it was captured by the evolving sand complex in Mannar Island. Today, rich deposits of mineral sand can be seen along its coastline. Hand auger drilling done in 2010 and 2014 (prior to Titanium Sands involvement) has shown significant high grade concentrations of mineral sands. The total heavy metal component was estimated at 11.7% with other mineral sands such as ilmenite, leucoxene, zirconium and rutile. Titanium oxide forms the basis for pigmented products used in a wide range of paints, plastics, paper and self-cleaning coatings. Other ilmenite minerals are used in  the production of titanium metal for aerospace industries, motor vehicles, medical implants and welding rods.

Other ilmenite minerals are used in the production of titanium metal for aerospace industries, motor vehicles, medical implants and welding rods

Mannar Island project
According to the Titanium Sands Ltd. (formerly known as Windimurra Vanadium Ltd.) website, the company has entered into an agreement with Srinel Holdings Ltd. to acquire a high grade ilmenite-leucoxene project on Mannar Island where ongoing drilling is expanding resources and reserves that can be brought rapidly into production with modest capital investments. Initial acquisition had been done in December 2018, and a further acquisition had been done in March 2020. The project is described as an ilmenite feedstock project with minor credits from other mineral components comprising five exploration licenses covering 166 square kilometres. The acquisition target will increase the tenure area to 204 square kilometres with four additional exploration licenses. As per their latest project update on June 16, 2020, the positive scoping study results have shown potential for an economically robust long-life major dredging project based on a single dredge, a primary concentrator and a mineral separation plant.

The Perth-based company is said to be operating in Australia and Sri Lanka. Once the COVID-19 restrictions are lifted, the company is planning to begin a 500-hole deeper reverse circulation air-core resource extension drilling programme, according to foreign media.

It is also important to evaluate socio-economic impacts on the communities. A similar project that was continued in Kwale County, Kenya was said to have had drastic impacts on the people. From health implications such as skin and respiratory diseases from dust emanated through drilling and sand dredging, to water contamination, land acquisition and compensation process, environmental degradation, loss of marine life, safety of employees and other matters too need to be given priority.

Speaking on a similar project happening from Komari to Akkaraipattu, Sajeewa Chamikara, Movement for Land and Agriculture Reform President, said sediments from Heda Oya, Kumbukkan Oya and Menik Ganga are vital for the formation of deposits at the coast from Komari to Akkaraipattu. “The total deposit spreads from Thambatte to Panama where many fisher folk live. Hence families in Thirukkovil, Vinayagapuram, Thambatte, Thambawil, Komatri, Thandiadi, Umili, Malalchenai,Urani, Pottuvil, Kandakuli and Panama will be directly affected by this project. A number of sensitive ecosystems such as corals, sand mounts and rocks that facilitate the breeding of fish in shallow seas close to the mineral sand deposits too will be destroyed. Prior to doing a large scale project of this nature it is important to conduct a proper environmental evaluation. A preliminary report is not enough. Public opinion too should be sought as it might affect neighbouring communities and their livelihoods.”

Legal provisions
A project of this nature should fall in line with the Coast Conservation and Coastal Resource Management Act, Mines and Minerals Act and the Antiquities Ordinance. Their provisions are as follows:
Coast Conservation and Coastal Resource Management Act No. 57 of 1981
According to the Act, no permit will be issued if a project has any adverse effect on the stability, productivity and environmental quality of the coastal zone.

Meanwhile section 16 (1) of the Act states: “Upon receipt of an application for a permit to engage in a development activity within the Coastal Zone, the Director may require the applicant to furnish an environmental impact assessment relating to such development activity and it shall be the duty of the applicant to comply with such requirement. Every environmental impact assessment furnished under this section shall contain such particulars as may be prescribed.”

According to section 63 of the Act, a person found guilty of such an offense can be presented before a Magistrates’ Court and if found guilty can be fined between Rs 50,000 – 500,000 on the first time, a fine of Rs 150,000 – 2 million on the second or subsequent times and/or a prison sentence of up to two years.

According to the Act, no permit will be issued if a project has any adverse effect on the stability, productivity and environmental quality of the coastal zone

Antiquities Ordinance
According to the Gazette notification 1152/14 dated October 4, 2000—published according to Sections 43 (a) and 47 of the Antiquities Ordinance, No.9 of 1940 and amended last by Act No. 24 of 1998—one needs to prepare an archeological impact assessment prior to mineral extraction and get it approved by the Director General of Archeology.

No mining licenses
When contacted, Chairman of Geological Survey and Mines Bureau (GSMB) Anura Walpola said nine licenses had been issued for mining purposes in Mannar. “Six of them have been issued to Lanka Mineral Sands Pvt. Ltd and three others to private projects which are pending renewal. In order to issue a mining license we need an Environmental Impact Assessment (EIA) report. But so far we haven’t received it from the said company. There are ongoing projects in Mannar and Pulmudai and we are looking at mining mineral sands in Aruwakkalu. The Northern coastal belt has rich deposits of ilmenite and zirconium. Another area we are looking at is the Southern sea which has an abundance of garnet sand. If we use these resources we will be able to retain a lot of money that is invested in importing these resources.”

However, Daily Mirror learns that a license has not been issued for mining purposes. “Explorations are done in square kilometres, whereas mining is done in hectares,” said Hema Liyanarachchi, Director, Mineral Titling at GSMB. “During an exploration the company checks the most suitable area to do the mining purposes. Thereafter they have to submit an EIA along with other documents such as contracts signed, mining plan, and rehabilitation plan and so on. The permit is issued only after evaluating the EIA and these relevant documents. Those who do mining without a license could be fined under Sections 28(1) and 63 of the Mines and Minerals Act,” she added.

Since the project is being done along the coastal belt from Komari to Akkaraipattu, approval from the Coastal Conservation Department too is required. “We haven’t issued a mining license for any project of this nature,” affirmed CCD Director General Prabath Chandrakeerthi. “Mannar is a sensitive ecosystem and if we are to issue a license we would do so after careful evaluation. Mining licenses have been issued to Lanka Mineral Sands Pvt. Ltd. However, permits could be issued for exploration purposes. But in order to do mining, an EIA is required first,” he said. 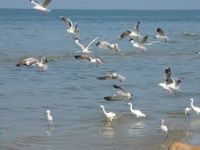