ABC News Item 3 March 2020.…. with this title “Victorian plane passenger tested for coronavirus as hospitals brace for ‘tens of thousands’ of COVID-19 cases”

A man who flew into Avalon Airport this morning is one of hundreds of people who have been tested for coronavirus in Victoria, as the state’s hospitals prepare for the pandemic phase of the outbreak. 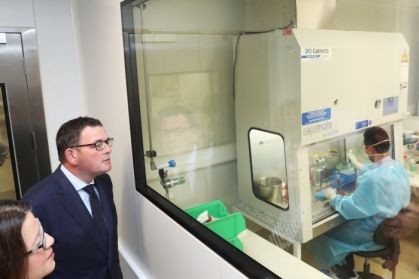 Paramedics were called to meet the commercial flight the man was travelling on at the airport about 11:30am after he showed signs of being unwell.

If the man tests positive for coronavirus he would be the state’s tenth coronavirus case, as the Government warns there could be delays to elective surgeries once the disease begins to spread more rapidly and hospitals need to reserve capacity. A spokesman for the Department of Health and Human Services said other passengers on the plane were allowed to go home, but would be notified if the man, aged in his 30s, tested positive to the virus.

Nine people have tested positive for COVID-19 in Victoria so far, while about 1,700 people tested in the state have returned negative results.

Victorian authorities have now received the passenger manifest for a flight carrying a coronavirus-infected woman which landed on Friday morning, and have begun asking passengers seated within two rows of the woman to self-isolate.

Earlier, Premier Daniel Andrews said there was every reason to believe the current containment strategy would end as the virus began spreading within the local community.

“If we get to what many believe to be an inevitable pandemic phase — so where containment no longer works and we finish up with more and more transmission at a local level — we’ll have tens of thousands of people who will need care,” Mr Andrews said.

“Some will be able to get that care in primary care settings, some may need because of underlying conditions or the severity of their case, they’ll need to be admitted to hospitals.

“That’s why we’re creating additional space, doing that detailed planning work, so that the inevitable large number of people who will be presenting to hospitals who wouldn’t normally be there can have every confidence that they’ll get the very best care possible.”

What you need to know

Here’s a rundown of all the facts about coronavirus, and how you can make sure you’re protected.

Mr Andrews made it clear the Government was not implementing the measures yet but later down the track they could include delaying non-urgent care or procedures, such as elective surgery.

“It may be the case that we need to defer or cancel a whole range of non-urgent care because there will be large numbers of people who are sicker and need to be treated much quicker than those who might be on an elective surgery waiting list,” he said.

“That will be inconvenient. That will be challenging, but that’s the only appropriate evidence-based, fact-based way to respond to the circumstances.”

Mr Andrews also announced that the State Government would be providing $6 million to Melbourne’s Doherty Institute — a joint venture between the University of Melbourne and The Royal Melbourne Hospital — to work with the Burnet Institute and other experts to fast-track new treatments and vaccines for COVID-19.

This comes on top of a $3.2 million donation for the institute announced today by the Jack Ma Foundation, which was established by Alibaba Group founder Jack Ma.

Space to play or pause, M to mute, left and right arrows to seek, up and down arrows for volume.

VIDEO: The ABC’s cameras were there the moment when Australian scientists discovered they had copied coronavirus(ABC News)

Scientists at the Doherty Institute were the first outside China to grow COVID-19 in the laboratory, and the first to share it with public health laboratories nationally and globally at the end of January. Doherty Institute director Sharon Lewin said the money would go towards developing a vaccine as well as tests and treatments for the virus.

However, she said a vaccine treatment was still a way off. “There are many candidates currently being tested for a vaccine,” Dr Lewin said. “We talk often about platforms — these are technologies that we know work and are now being applied for COVID-19 — and some of those platforms will be in clinical trials, actually quite soon.

“One of those is from the US using RNA. Others, if you’re starting from scratch, may take 12 to 18 months to get into clinical trials.

“So I think we would still be 12 to 18 months away before we see anything.”