Simon Benson,  in The Australian 29 June 2017, where the title is  “People-smugglers downsize to beat barricade”

However, it is the growing number of smuggling operations disrupted before boats can set sail that has led to ­intelligence ­officials believing a new model is now being tested. The Australian can reveal the number of asylum-seekers turned back since Operation Sovereign Borders came into force in December 2013 has reached 771 aboard 31 boats. Of those, 14 boats were turned back, the occupants of 11 vessels were taken by air to their original point of departure, and the rest subjected to ­an ­“assisted” return, which includes escorted returns and transfers to another vessel.

The commander of Operation Sovereign Borders, Stephen ­Osborne, told The Australian he was concerned not just about the number of attempts to use a new model of operation, but the intent by people-smugglers to once again test the borders. 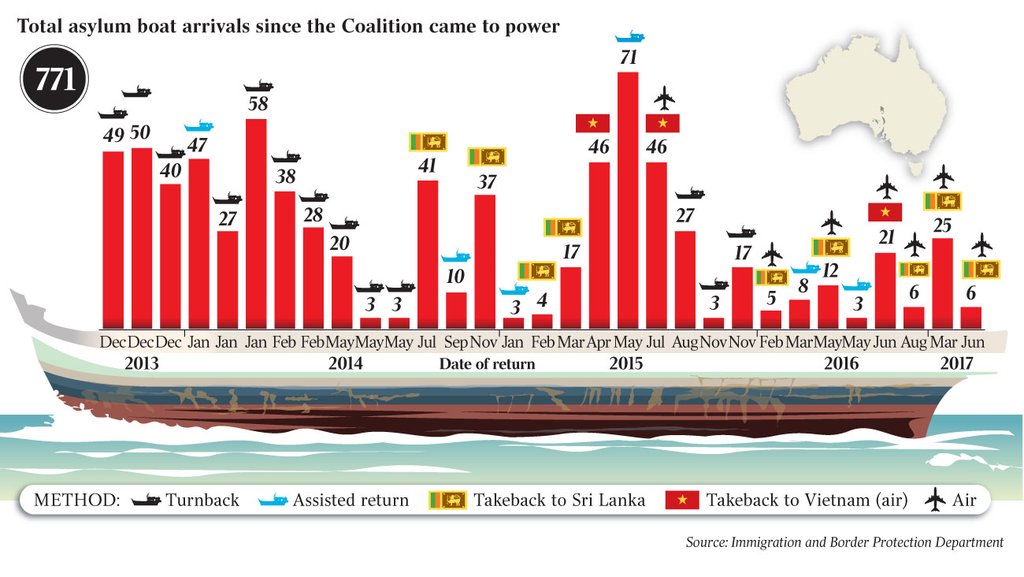 The Australian can confirm a boat from Sri Lanka was ­intercepted this month in an ­undisclosed region not common to people-smuggling boats. It was carrying just six people, who were flown back to Sri Lanka from Christmas Island on Monday. A government-chartered jet was used to return the Sri-Lankans to Colombo in the first “takeback” since March.

“When we look at the size of the ventures before OSB came into force in 2013, we saw heavily loaded vessels with 40 to 50 people … they were bigger groups which were logistically difficult for people-smugglers, they took longer to launch,” Air Vice-­Marshal Osborne said. “What we are seeing in recent time, this year, are smaller ventures. We believe that they are thinking about making smaller targets … less easy to find, less easy to detect. They are definitely testing a new model. We have had a number that have also tried but been detected and disrupted and never resulted in people getting on.”

Intelligence agencies, including the Australian Secret Intelligence Service as well as the Australian Federal Police, have become critical in attempts to shut the new model through detecting and disrupting asylum-seekers ­before they take to sea.

According to figures obtained by The Australian, in the first year of Sovereign Borders, the average number of people aboard a boat was 31, with vessels regularly carrying up to 50 people. This had dropped to an average of 11 since February this year.

Air Vice-Marshal Osborne said the closure of Manus Island had encouraged people-smugglers to restart operations. “It has something to do with it … our classified and unclassified intelligence is saying that people-smugglers are telling refugees that the government has softened its approach to asylum-seekers,” he said. “We want them to get the message that we know you are changing your methods … we are alert to you, and whether you are six or 60 we will find you.”

Air Vice-Marshal Osborne said the new model was even more perilous for asylum-seekers due to the new routes being chartered, which meant boats were at sea for weeks at a time. “We don’t want people to put their lives at risk,” he said. “It is particularly important that they are giving false hope to people. We are concerned because while it has been relatively quiet for a while, the biggest risk is complacency. People-smugglers are still there … they are certainly making life hard for us … they are still watching what is going on and there are still a lot of people willing to pay money and put their lives at risk.”

Malcolm Turnbull told The Australian that this month’s boat arrival should serve as a reminder that people-smugglers would ­continue to test the borders and he warned of the lessons from ­countries which had lost control of their borders.

“Our message is very clear — if you try and come to Australia on a boat you will not be allowed in,” the Prime Minister said. “People-smuggling boats that try to reach Australia will be intercepted and turned back. This attempted illegal boat ­arrival shows the people-smugglers will continue to test our resolve and our border security. We have seen elsewhere what happens when nations lose control of their borders and fail to invest in the integration of migrants who arrive. We cannot afford to let this happen again. We will not let it happen again.”