Soulbury to Suntha on Sinhala Stupidity in April 1964

With thanks to COLOMBO TELEGRAPH, May 2013 … yes 2013, https://www.colombotelegraph.com/index.php/sinhala-stupidity-i-feel-sorry-for-the-tamil-community/ … note lively body of blog comments in that site

Dear Mr. Suntharalingham,
I have read the dozen documents in the folder which I now return to you – with much interest and also much sorrow. During my tenure of the office as Governor-General of Ceylon I never expected that there would be such a bitter cleavage between the Sinhalese and Tamil communities – and you are quite right when you say that the cause must be laid at the door of Sir John Kotalawala and his government. But if he chastised the Tamils with the whips, the late Mr. Bandaranaike chastised them with scorpions. The Sinhalese behaviour to the Tamils has been excessively short-sighted and foolish. When as Chairman of the Commission on the reform of the Constitution of Ceylon in 1945 I studied the relations of the two communities. I was much impressed by the important contribution  that the Tamils had made and were making to the economy of Ceylon – and I was aware that the Ceylon Tamils were better educated and more industrious than the Sinhalese – in many ways they were playing the part of the Scots had played and still play in the economy of England. In fact during 18th and part of 19th century – the English were rather jealous of the Scots – who were getting a greater share of the jobs going in England than their population warranted. The reason, I Think, was that the Scots were better educated and more industrious – Northern folk often work harder than Southerners; the climate and soil compel them to do so. But the English were never so stupid as to antagonise the Scots.  Had they behaved like Sinhalese to the Tamils, Britain would never have achieved a tittle of her prosperity at home or overseas in the Empire.

If at this time of the act of Union between England and Scotland at the beginning of the 18th century the English had insisted on “English only” as the language of the two nations, every Scot would have hung on to Gaelic, but the English had more sense and every Scottish Mother had her children taught English because it was England that offered the greatest opportunity of employment.
If the Sinhalese had been as sensible, every Tamil Mother would have been anxious for her children to learn Sinhalese-for the same reason. I do not know what is now the best solution, or if there is any solution.
In constitution which I recommended-there seemed to me at the time to be ample safeguard for minorities – but section 29 has not [been] as efficacious as I had hoped  – and I now wish that that I had recommended a human rights clause as in the constitution of India – and elsewhere. But I do not believe that other federation or an autonomous Tamil State will work. Federation is cumbersome and difficult to operate – and an autonomous Tamil State would not be viable.
I am afraid that I can only counsel patience – and vigorous participation in the work of the House of Representatives. You might imitate the Irish party in our House of Commons before Ireland was separated from us. Incidently the Tamil Members of Parliament were, in my opinion, very unwise not support Dudley Senanayake. They could, I believe, have kept him in power.
The position of the Tamil workers on the estates is also very disquieting – it is deplorable that such a larger body of men and women should be voteless.
I can understand the reluctance of the Sinhalese in the area of Kandy to an enfranchisement of numbers large enough to swamp the electorate. But a reasonable solution would be to create four or five seats available to Tamil voters only – no matter what part of the island they live in; outside of course – northern and Eastern provinces.
Well – I feel sorry for you and your community and I wish I could provide some acceptable solution.
Were I in your shoes I would do all I could to support the U.N.P. and secure the defeat of the present Government.
Soulbury
30.04.1964

Soulbury and Sir John Kotelawela relaxing among the masses — at some perahera perhaps
From “Eylom: Beginning of the Freedom Struggle; Dozens Documents”  by C Suntherlingham
*Herwald Ramsbotham, 1st Viscount Soulbury GCMG, GCVO, OBE, MC, PC (6 March 1887 – 30 January 1971) was a British Conservative politician. He was a government minister between 1931 and 1941 and served as Governor-General of Ceylon between 1949 and 1954. 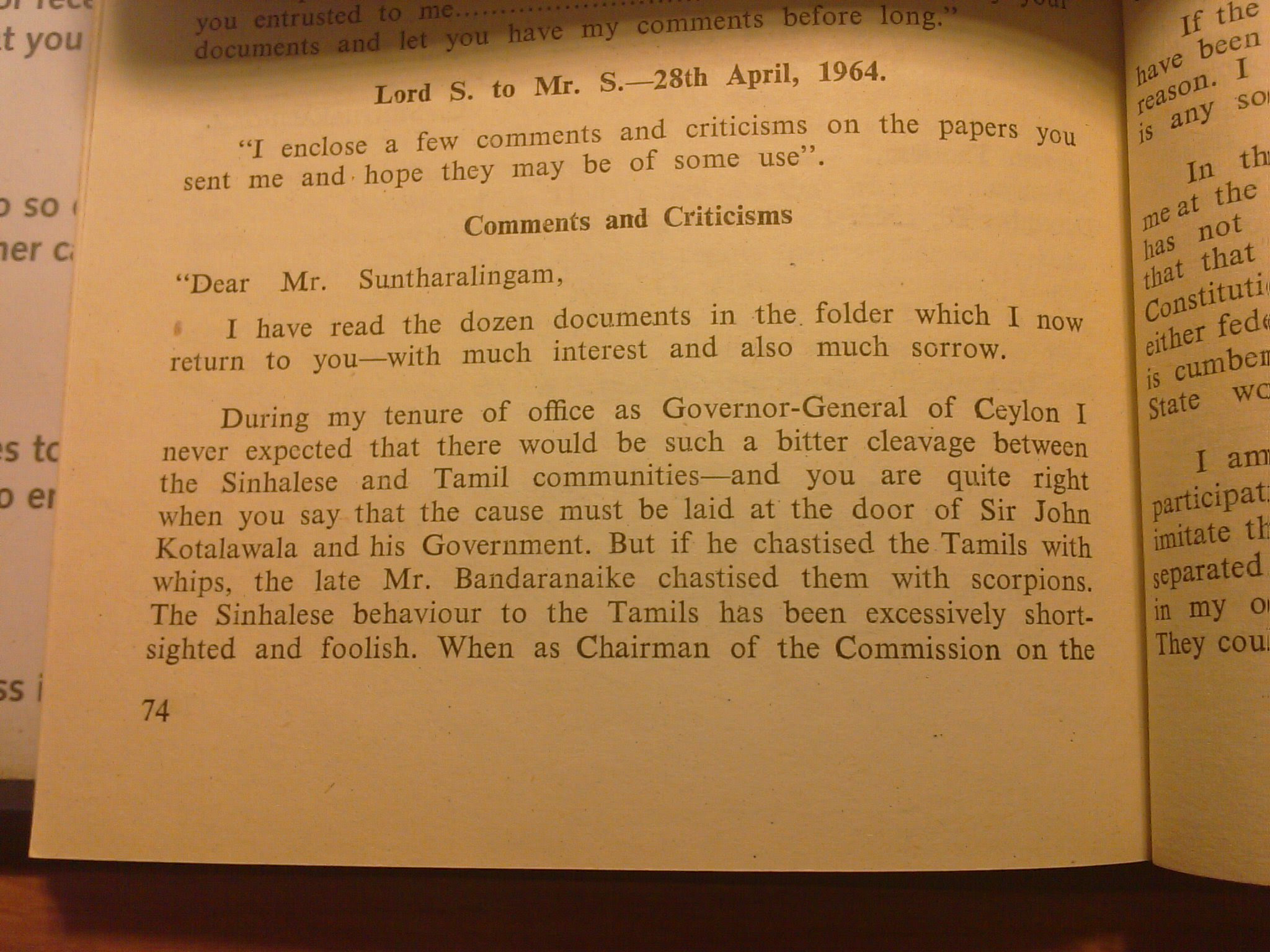 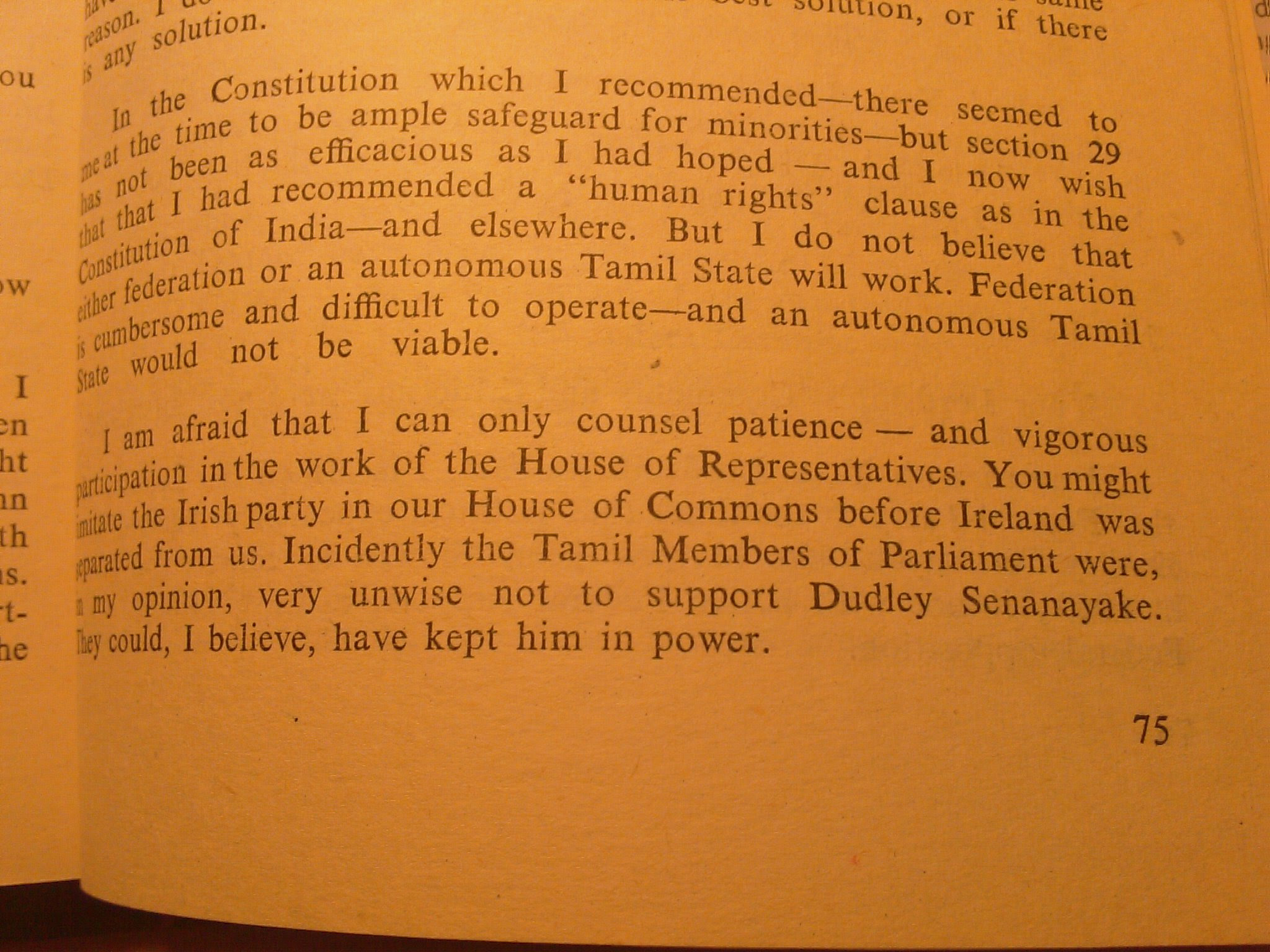